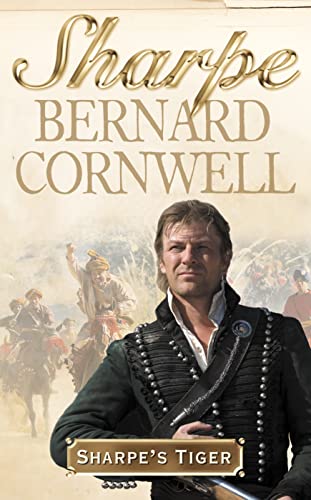 The prequel to the series, describing Sharpe's experiences in India.

Sharpe's Tiger: The Siege of Seringapatam, 1799 (The Sharpe Series, Book 1) by Bernard Cornwell

The prequel to the series, describing Sharpe's experiences in India.

When a senior British officer is captured by the Tippoo of Mysore's forces, Sharpe is offered a chance to attempt a rescue, which in turn offers an escape from the tyrannical Sergeant Obadiah Hakeswill.

But in fleeing Hakeswill, Sharpe enters the exotic and dangerous world of the Tippoo. An adventure that will require all of his wits just to stay alive, let alone save the British army from catastrophe.

GOR001670812
9780007235049
0007235046
Sharpe's Tiger: The Siege of Seringapatam, 1799 (The Sharpe Series, Book 1) by Bernard Cornwell
Bernard Cornwell
The Sharpe Series
Used - Very Good
Paperback
HarperCollins Publishers
2006-04-18
384
N/A
Book picture is for illustrative purposes only, actual binding, cover or edition may vary.
This is a used book - there is no escaping the fact it has been read by someone else and it will show signs of wear and previous use. Overall we expect it to be in very good condition, but if you are not entirely satisfied please get in touch with us
Trustpilot