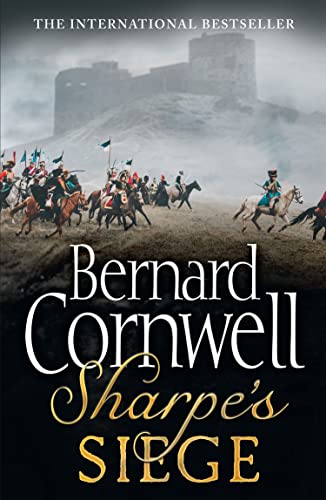 Richard Sharpe, abandoned in enemy territory, has to trust in assistance from a hostile American privateer.

Richard Sharpe, abandoned in enemy territory, has to trust in assistance from a hostile American privateer.

The invasion of France is under way and the British Navy has called upon the services of Major Richard Sharpe. He and a small force of riflemen are to capture a fortress and secure a landing on the French coast - one of the most dangerous missions of his career.

Through the reckless incompetence of a naval commander, Sharpe finds himself abandoned in the heart of enemy territory, facing overwhelming forces and the very real prospect of defeat. He has no choice but to trust his fortunes to an American privateer - a man who has no love for the British invaders.

Bernard Cornwell was born in London, raised in Essex and now mostly lives in the USA. He is the author of the Arthurian series, the Warlord Chronicles; the Starbuck Chronicles, on the American Civil War; Stonehenge; the Grail Quest Series; Gallow's Thief and The Last Kingdom.

GOR005103912
9780007452880
0007452888
Sharpe's Siege: The Winter Campaign, 1814 (The Sharpe Series, Book 18) by Bernard Cornwell
Bernard Cornwell
The Sharpe Series
Used - Very Good
Paperback
HarperCollins Publishers
2012-06-07
368
N/A
Book picture is for illustrative purposes only, actual binding, cover or edition may vary.
This is a used book - there is no escaping the fact it has been read by someone else and it will show signs of wear and previous use. Overall we expect it to be in very good condition, but if you are not entirely satisfied please get in touch with us
Trustpilot