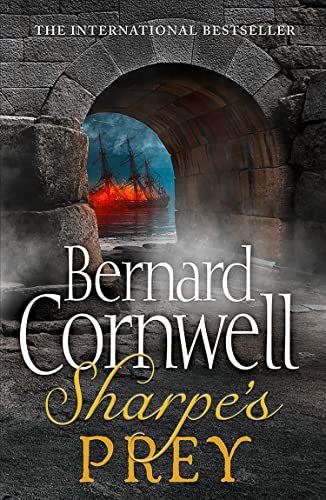 Sharpe's Prey: The Expedition to Copenhagen, 1807 (The Sharpe Series, Book 5) by Bernard Cornwell

When Lieutenant Richard Sharpe arrives in Copenhagen on a secret mission to help stop a war, he finds a city swarming with spies and deceit. Yet the French forces are gathering, their eyes on the Danish navy's impressive battle fleet: one that could replace every ship they lost at Trafalgar.

The city burns, attacked by the French and besieged by the British. And discovering that he'll have to make his own rules, fighting through the shadowy maze of friends and foes, is Sharpe . . .

GOR009351866
9780007425853
0007425856
Sharpe's Prey: The Expedition to Copenhagen, 1807 (The Sharpe Series, Book 5) by Bernard Cornwell
Bernard Cornwell
The Sharpe Series
Used - Like New
Paperback
HarperCollins Publishers
2011-09-15
352
N/A
Book picture is for illustrative purposes only, actual binding, cover or edition may vary.
The book has been read, but looks new. The book cover has no visible wear, and the dust jacket is included if applicable. No missing or damaged pages, no tears, possible very minimal creasing, no underlining or highlighting of text, and no writing in the margins
Trustpilot