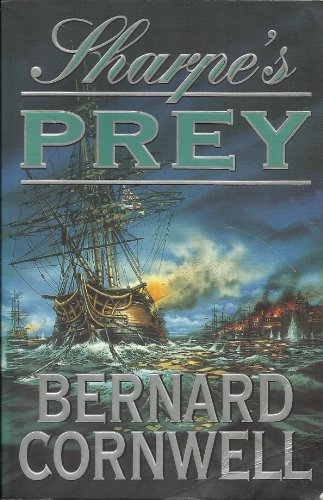 The eighteenth novel in this bestselling series takes Sharpe to battle in Copenhagen.

The eighteenth novel in this bestselling series takes Sharpe to battle in Copenhagen.

It is 1807 and Lieutenant Richard Sharpe, newly returned to England, now wants to leave the army. He is offered one last job: go to Copenhagen, help deliver a bribe and so stop a war. It seems very easy.

But nothing is easy in a Europe stirred by French ambitions. The Danes possess a battle fleet that could replace every ship the French lost at Trafalgar, and Napoleon's forces are gathering to take it. The British have to stop them, while the Danes insist on remaining neutral.

Sharpe was not sent to Copenhagen to dabble in high politics - he is there to employ the skills he learned on the streets of London's slums. Dragged into a war of spies and brutality, Sharpe finds that he is a sacrificial pawn. But pawns can sometimes change the game, and Sharpe makes his own rules. When he discovers a traitor in his midst, he becomes a hunter in a city besieged by British troops.

Copenhagen is doomed. In three nights of horror, as the city burns, Sharpe must protect a woman, find his traitor, and stay alive.

Bernard Cornwell was born in London, raised in Essex and worked for the BBC for eleven years before meeting Judy, his American wife. Denied an American work permit he wrote a novel instead and has been writing ever since. He and Judy divide their time between Cape Cod and Charleston, South Carolina.
GOR008504404
9780002258777
0002258773
Sharpe's Prey by Bernard Cornwell
Bernard Cornwell
Used - Very Good
Paperback
HarperCollins Publishers
2001-04-23
272
N/A
Book picture is for illustrative purposes only, actual binding, cover or edition may vary.
This is a used book - there is no escaping the fact it has been read by someone else and it will show signs of wear and previous use. Overall we expect it to be in very good condition, but if you are not entirely satisfied please get in touch with us
Trustpilot