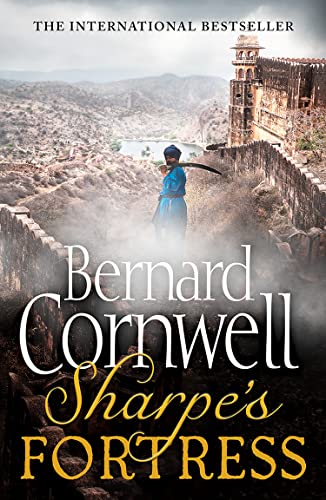 The British army are closing in on enemy troops in western India and Ensign Richard Sharpe, freshly promoted yet unsure of his position, finds himself vulnerable: he's unwelcome among the officers, yet finds hidden enemies within the ranks. With no-one he can trust, Sharpe is in serious danger when an old adversary arrives on his trail - and a terrible act of betrayal draws him into the eye of the storm.

All roads lead to Gawilghur, a legendary, impregnable fortress in the sky. In the heart of enemy territory, the British carry out a near-impossible siege. And joining the front line, risking his honour and reputation in a battle that will test him as never before, is Sharpe . . .

GOR009648382
9780007425815
0007425813
Sharpe's Fortress: The Siege of Gawilghur, December 1803 (The Sharpe Series, Book 3) by Bernard Cornwell
Bernard Cornwell
The Sharpe Series
Used - Like New
Paperback
HarperCollins Publishers
2011-09-15
400
N/A
Book picture is for illustrative purposes only, actual binding, cover or edition may vary.
The book has been read, but looks new. The book cover has no visible wear, and the dust jacket is included if applicable. No missing or damaged pages, no tears, possible very minimal creasing, no underlining or highlighting of text, and no writing in the margins
Trustpilot