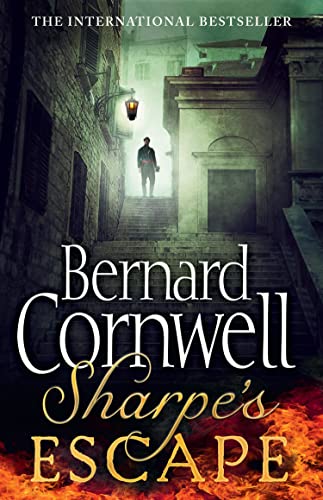 Richard Sharpe, with enemies on every side, survives Marshall Massena's attack and ends at the lines of Torres Vedras.

Richard Sharpe, with enemies on every side, survives Marshall Massena's attack and ends at the lines of Torres Vedras.

Sharpe's job as Captain of the Light Company is under threat and he has made a new enemy, a Portuguese criminal known as Ferragus. Discarded by his regiment, Sharpe wages a private war against Ferragus - a war fought through the burning, pillaged streets of Coimbra, Portugal's ancient university city.

Sharpe's Escape begins on the great, gaunt ridge of Bussaco where a joint British and Portuguese army meets the overwhelming strength of Marshall Massena's crack troops. It finishes at Torres Vedras where the French hopes of occupying Portugal quickly die.

GOR009648381
9780007452934
0007452934
Sharpe's Escape: The Bussaco Campaign, 1810 (The Sharpe Series, Book 10) by Bernard Cornwell
Bernard Cornwell
The Sharpe Series
Used - Like New
Paperback
HarperCollins Publishers
2012-03-01
448
N/A
Book picture is for illustrative purposes only, actual binding, cover or edition may vary.
The book has been read, but looks new. The book cover has no visible wear, and the dust jacket is included if applicable. No missing or damaged pages, no tears, possible very minimal creasing, no underlining or highlighting of text, and no writing in the margins
Trustpilot