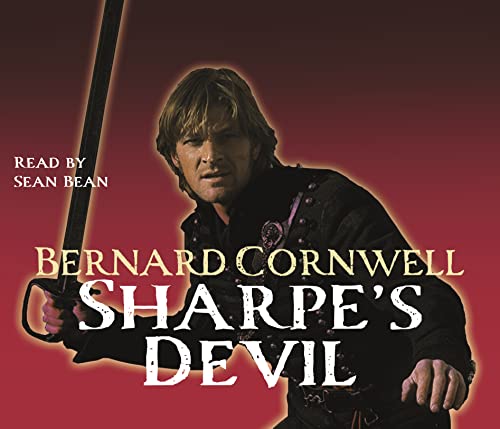 Taking Richard Sharpe to St Helena and Chile, this is an adventure story in the classic tradition. Read by the star of TV's Sharpe series, Sean Bean.

Taking Richard Sharpe to St Helena and Chile, this is an adventure story in the classic tradition. Read by the star of TV's Sharpe series, Sean Bean.

Five years after the Battle of Waterloo, Sharpe's peaceful retirement in Normandy is shattered. An old friend, Don Blas Vivar, is missing in Chile, reported dead at rebel hands - a report his wife refuses to believe. She appeals to Sharpe to find out the truth.

So it is that reluctant Sharpe, along with Patrick Harper, find themselves bound for Chile via St. Helena, where they have a fateful meeting with the fallen Emperor Napoleon. Convinced that they are on their way to collect a corpse, neither man can imagine that dangers that await them in Chile...

GOR006148254
9780007315314
0007315317
Sharpe's Devil (The Sharpe Series, Book 22) by Bernard Cornwell
Bernard Cornwell
The Sharpe Series
Used - Very Good
Hardback
HarperCollins Publishers
20090806
N/A
Book picture is for illustrative purposes only, actual binding, cover or edition may vary.
This is a used book - there is no escaping the fact it has been read by someone else and it will show signs of wear and previous use. Overall we expect it to be in very good condition, but if you are not entirely satisfied please get in touch with us
Trustpilot