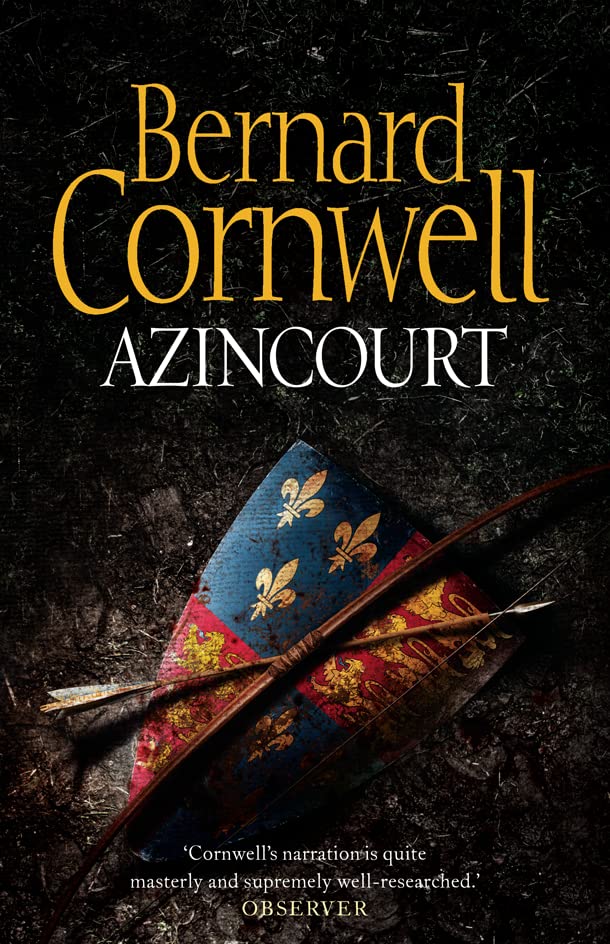 A unique novel, looking at one the greatest battles, a battle that was a turning point in history, from many points of view, by a master storyteller.

A unique novel, looking at one the greatest battles, a battle that was a turning point in history, from many points of view, by a master storyteller.

Bernard Cornwell has been thinking about this subject for years. He has long wanted to write a book about a single battle, the events that lead up to it, the actual days in the battle and the aftermath from multiple viewpoints.

Agincourt, fought on October 25th 1415, on St Crispin's Day, is one of the best known battles, in part through the brilliant depiction of it in Shakespeare's Henry V, in part because it was a brilliant and unexpected English victory and in part because it was the first battle won by the use of the longbow. This was a weapon developed in this form only by the English - parishes were forced to train boys from as young as eight daily - and enabled them to dominate the European battlefields for the rest of the century.

Lively historical characters abound on all sides but in Bernard Cornwell's hands the fictional characters, horsemen, archers, nobles, peasants are authentic and vivid, and the hour by hour view of the battle is dramatic and gripping.

'If Bernard Cornwell was born to write one book, this is it. No other historical novelist has acquired such a mastery of the minutiae of warfare in centuries past. No one else could hope to take Shakespeare's Henry V, strip it of its rhetoric and tell the unvarnished truth about the Battle of Agincourt'
Telegraph

'Nobody in the world does this stuff better than Cornwell - action set six hundred years ago is a fresh and vital as six days ago, with rough, tough men at war, proving once again that nothing changes - least of all great storytelling'
Lee Child

'This is typical Cornwell, meticulously researched, massive inscope, brilliant in execution' The Sun

'Great action scenes, rich in period detail, are underpinned by a feeling for the passions that shaped the Britain we know today' Sunday Telegraph, Seven Magazine

Bernard Cornwell is a literary miracle. Year after year, hail, rain, snow, war and political upheavals fail to prevent him from producing the most entertaining and readable historical novels of his generation' Daily Mail

'Cornwell's narration is quite masterly and supremely well-researched' Observer

Bernard Cornwell was born in London, raised in Essex, and now lives mainly in the USA with his wife. In addition to the hugely successful Sharpe novels, Bernard Cornwell is the author of the Starbuck Chronicles, the Warlord trilogy, the Grail Quest series and the Alfred series.

GOR001290352
9780007273713
0007273711
Azincourt by Bernard Cornwell
Bernard Cornwell
Used - Very Good
Paperback
HarperCollins Publishers
2008-10-01
464
Short-listed for Galaxy British Book Awards: Sainsbury's Popular Fiction Award 2009
Book picture is for illustrative purposes only, actual binding, cover or edition may vary.
This is a used book - there is no escaping the fact it has been read by someone else and it will show signs of wear and previous use. Overall we expect it to be in very good condition, but if you are not entirely satisfied please get in touch with us
Trustpilot