The Mushroom at the End of the World Anna Lowenhaupt Tsing 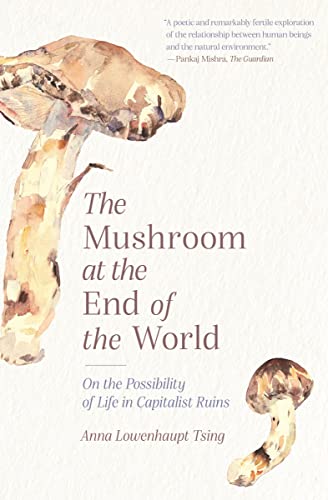 The Mushroom at the End of the World: On the Possibility of Life in Capitalist Ruins by Anna Lowenhaupt Tsing

Matsutake is the most valuable mushroom in the world-and a weed that grows in human-disturbed forests across the northern hemisphere. Through its ability to nurture trees, matsutake helps forests to grow in daunting places. It is also an edible delicacy in Japan, where it sometimes commands astronomical prices. In all its contradictions, matsutake offers insights into areas far beyond just mushrooms and addresses a crucial question: what manages to live in the ruins we have made?

A tale of diversity within our damaged landscapes, The Mushroom at the End of the World follows one of the strangest commodity chains of our times to explore the unexpected corners of capitalism. Here, we witness the varied and peculiar worlds of matsutake commerce: the worlds of Japanese gourmets, capitalist traders, Hmong jungle fighters, industrial forests, Yi Chinese goat herders, Finnish nature guides, and more. These companions also lead us into fungal ecologies and forest histories to better understand the promise of cohabitation in a time of massive human destruction.

By investigating one of the world's most sought-after fungi, The Mushroom at the End of the World presents an original examination into the relation between capitalist destruction and collaborative survival within multispecies landscapes, the prerequisite for continuing life on earth.