On a winter’s day in February 1944 from Italy, a Lance Corporal named ‘John’ took to pen and paper to thank a schoolgirl in High Wycombe for her small yet valuable contribution to the war effort – knitting mittens for anonymous troops in the trenches. 76 years later, this piece of World War 2 history was rediscovered by World of Books, the UKs largest seller of used books and media, tucked away inside a book being prepared for resale.

The letter’s recipient, ‘Miss Pat’ of Hatters Lane Senior School in High Wycombe Buckinghamshire, would have been one of many civilians on the home front who were encouraged to do their bit to support the British War effort, according to the British Red Cross who were approached by the company for help – and who themselves ran a number of initiatives to get Britain knitting.

The British Red Cross has been helping people in crisis for 150 years, providing support to those who need it most, no matter who or where they are. During the First and Second World Wars, the organisation gave relief to sick and wounded members of the armed forces, prisoners of war and civilians.

It also connected the kindness of those at home to the war effort by publishing knitting patterns of essential items in the Joint War Organisation’s The Prisoner of War magazine. The magazines were for the families of prisoners of war and these patterns could have been used as part of a school project to send to ‘John’.

Now, World of Books and British Red Cross are teaming up to try and reunite this precious letter with its owner and to celebrate the small acts of kindness from home that provided such comfort to soldiers serving overseas.

Graham Bell, CEO of World of Books Group says: “Over 75 million used books come through our business each year, and we occasionally come across forgotten personal items tucked away inside them. It’s incredibly common for people to place memories inside books for safe keeping, whether it be family photographs or letters from loved ones. But this find is particularly poignant, especially as we approach Armistice Day – and is a first for World of Books. The letter undoubtedly holds great sentimental value. We’d love to reunite it with its owner or their family.

As a circular economy business, we’re focused on finding used items new homes. In this case, it would be wonderful to bring this letter back full circle to its original owner.”

Mezebhin Adam, Curator at the British Red Cross said “The letter is a lovely find and is a perfect first-hand example of how kindness can keep people connected during a crisis, something the British Red Cross has been doing for 150 years. During the Second World War, the British Red Cross encouraged people to knit comforts for sick and wounded soldiers and prisoners of war. We provided knitting patterns to those on the home front and we even have examples of some of the knitted items in our museum collection. The stories of these activities are always lovely to hear, especially from such a personal heartwarming letter.”

If you have any information that could help World of Books and the British Red Cross reunite this letter with its owner or their families, contact press@wob.com. 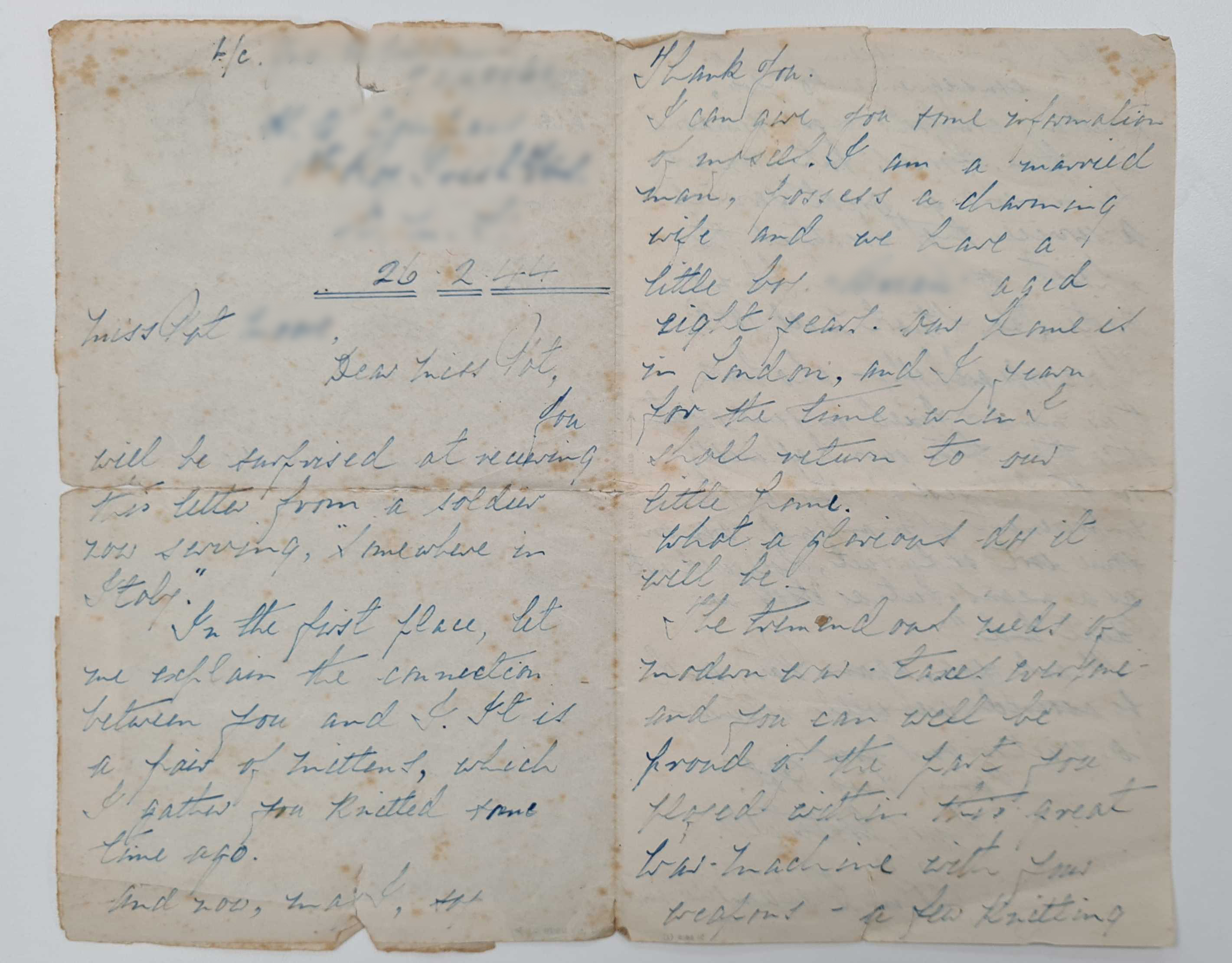 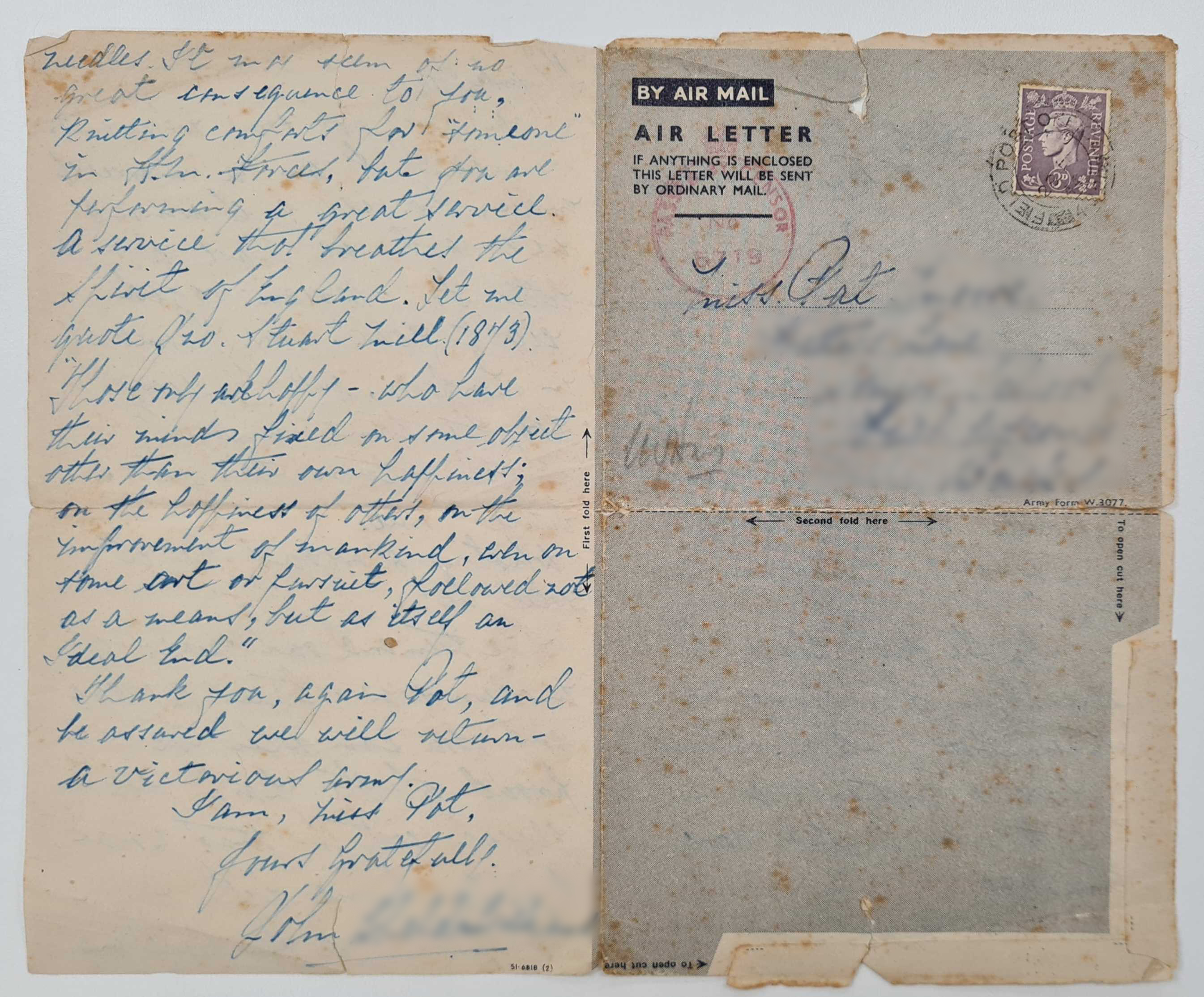 About World of Books Group

For over 150 years, the British Red Cross has helped people in crisis, whoever and wherever they are. We are part of a global voluntary network, responding to conflicts, natural disasters and individual emergencies. We enable vulnerable people in the UK and abroad to prepare for and withstand emergencies in their own communities. And when the crisis is over, we help them recover and move on with their lives. redcross.org.uk.