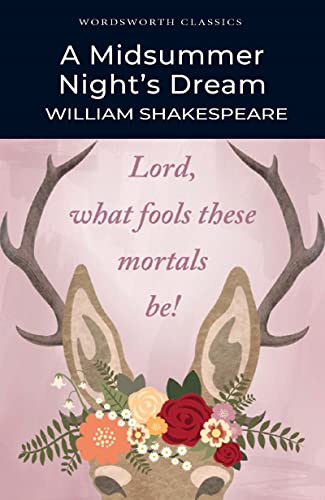 Blends the supernatural and the mundane, the illusory and the substantial. This work treats love as tragic, poignant, absurd and farcical.

The Wordsworth Classics' Shakespeare Series, with Romeo and Juliet, Henry V and The Merchant of Venice as its inaugural volumes, presents a newly-edited sequence of William Shakespeare's works. The textual editing takes account of recent scholarship while giving the material a careful reappraisal.

Its lyricism, comedy (both broad and subtle) and magical transformations have long made A Midsummer Night's Dream one of the most popular of Shakespeare's works. The supernatural and the mundane, the illusory and the substantial, are all shimmeringly blended. Love is treated as tragic, poignant, absurd and farcical. 'Lord, what fools these mortals be!', jeers Robin Goodfellow; but the joke may be on him and on his master Oberon when Bottom the weaver, his head transformed into that of an ass, is embraced by the voluptuously amorous Titania.

Recent stage-productions of A Midsummer Night's Dream have emphasised the enchanting, spectacular, ambiguous and erotically joyous aspects of this magical drama which culminates in a multiple celebration of marriage.

GOR000675760
9781853260308
1853260304
A Midsummer Night's Dream by William Shakespeare
William Shakespeare
Wordsworth Classics
Used - Very Good
Paperback
Wordsworth Editions Ltd
1992-05-05
128
N/A
Book picture is for illustrative purposes only, actual binding, cover or edition may vary.
This is a used book - there is no escaping the fact it has been read by someone else and it will show signs of wear and previous use. Overall we expect it to be in very good condition, but if you are not entirely satisfied please get in touch with us
Trustpilot