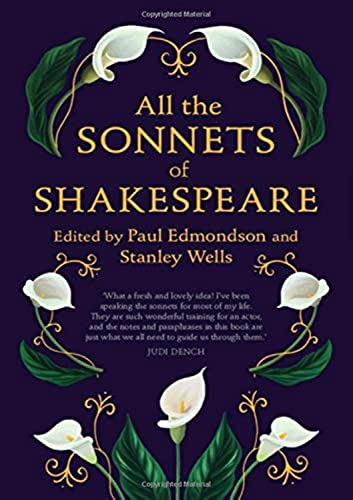 Intended for all readers of Shakespeare, this beautiful and ground-breaking book arranges Shakespeare's sonnets printed in 1609 in chronological order and intersperses the sonnets from the plays among them. A lively introduction provides essential background, while explanatory notes and modern English paraphrases illuminate the sonnets' meanings.

How can we look afresh at Shakespeare as a writer of sonnets? What new light might they shed on his career, personality, and sexuality? Shakespeare wrote sonnets for at least thirty years, not only for himself, for professional reasons, and for those he loved, but also in his plays, as prologues, as epilogues, and as part of their poetic texture. This ground-breaking book assembles all of Shakespeare's sonnets in their probable order of composition. An inspiring introduction debunks long-established biographical myths about Shakespeare's sonnets and proposes new insights about how and why he wrote them. Explanatory notes and modern English paraphrases of every poem and dramatic extract illuminate the meaning of these sometimes challenging but always deeply rewarding witnesses to Shakespeare's inner life and professional expertise. Beautifully printed and elegantly presented, this volume will be treasured by students, scholars, and every Shakespeare enthusiast.
'What a fresh and lovely idea! I've been speaking the sonnets for most of my life. They are such wonderful training for an actor, and the notes and paraphrases in this book are just what we all need to guide us through them.' Judi Dench
'Paul Edmondson and Stanley Wells have done something daring, controversial, and richly illuminating. To the 154 poems collected in the celebrated volume of Shakespeare's Sonnets they have conjoined the sonnets that appear in the plays - such as the famous lines shared by Romeo and Juliet. To these they have added a number of passages from the plays that are in effect close relations to the conventional sonnet form. The result is to break down the walls and set Shakespeare's famous sequence in a much expanded field of poetic making. But that is not all: jettisoning the order in which the sonnets first appeared in print, Edmondson and Wells arrange them in what they take to be their chronological order of composition. The result is something radical and unsettling. To make these deeply familiar poems seem unexpected and new is a significant achievement.' Stephen Greenblatt, Author of Tyrant: Shakespeare on Politics and The Rise and Fall of Adam and Eve
'A marvellously refreshing new look at Shakespeare's devotion to the sonnet form, expanding our understanding of the published sonnets by adding those he included in the plays. The single sentence description of each sonnet is also immensely useful and helpful to even the most seasoned reader.' Gregory Doran, Royal Shakespeare Company, Artistic Director
'This is a book of clarity and love which shadows the mind in time of Shakespeare the poet and in so doing brings us closer than ever before to his own awareness of the reach of his genius.' Carol Ann Duffy
'All the Sonnets of Shakespeare presents a wealth of valuable material and compelling interpretations in a clear, comprehensible, and convincing style that will hold appeal not only for Shakespeare scholars and students, but for all devotees of 'the supreme poet-dramatist' and his work.' Deb Miller, DC Metro Theater Arts
'A valuable project, and one which achieves what Shakespeare editions so often promise but so rarely deliver: which is to prompt a genuinely new way of looking at these familiar works.' Daniel Swift, The Spectator
'What Edmondson and Wells have done is both groundbreaking and profoundly significant ... whether dipping in for a brief encounter or wanting to fully immerse oneself in the entire Sonnet canon, with scholarly explication and guidance, All the Sonnets of Shakespeare is a one volume tour de force. 400 years after his death, Edmondson and Wells have breathed new life into our engagement with his poetic output and a revised understanding of the man, his motives and his responses to creative muses ... I strongly recommend grabbing a copy of their book and rediscovering the Sonnets for yourself! The casual reader will be both enlightened and entertained and the scholar will be academically stimulated.' Paul Spalding-Mulcock, Yorkshire Times
'... a model of editing, which scraps the conventional sentimentalities and lets us read the Sonnets as poems - explorations into worlds of possible feeling, speech and thought, rather than coded memoirs.' Rowan Williams, New Statesman, Books of the Year 2020
Paul Edmondson is Head of Research and Knowledge and Director of the Stratford-upon-Avon Poetry Festival for the Shakespeare Birthplace Trust. He is the author, co-author, and co-editor of many books and articles about Shakespeare, including Shakespeare: Ideas in Profile (2015), Twelfth Night (2005), The Shakespeare Circle: An Alternative Biography (2015) and Shakespeare Beyond Doubt: Evidence, Argument, Controversy (2013) (both with Stanley Wells for Cambridge University Press), Shakespeare's Creative Legacies (with Peter Holbrook, 2016); Finding Shakespeare's New Place: an archaeological biography (with Kevin Colls and William Mitchell, 2016) and New Places: Shakespeare and Civic Creativity (co-edited with Ewan Fernie, 2018). Professor Sir Stanley Wells Stanley Wells, CBE, FRSL, is Honorary President at The Shakespeare Birthplace Trust. His many books include Shakespeare: For All Time (2002), Looking for Sex in Shakespeare (2004), Shakespeare & Co. (2006), Shakespeare, Sex, and Love (2010) and Great Shakespeare Actors (2015). He edited Shakespeare Survey for almost twenty years, and is co-editor of The Cambridge Companion to Shakespeare on Stage (with Sarah Stanton, Cambridge, 2002), The New Cambridge Companion to Shakespeare (with Margreta de Grazia, Cambridge, 2010) and The Shakespeare Circle: An Alternative Biography (with Paul Edmondson, Cambridge, 2015). He is also the General Editor of the Oxford and Penguin editions of Shakespeare.
Introduction Paul Edmondson and Stanley Wells; About this Volume; Sonnets; Textual Notes, All the Sonnets of Shakespeare: Literal Paraphrases, Numerical Index of Shakespeare's Sonnets (1609), Index of First Lines.
NGR9781108490399
9781108490399
1108490395
All the Sonnets of Shakespeare by William Shakespeare
William Shakespeare
New
Hardback
Cambridge University Press
2020-09-10
306
N/A
Book picture is for illustrative purposes only, actual binding, cover or edition may vary.
This is a new book - be the first to read this copy. With untouched pages and a perfect binding, your brand new copy is ready to be opened for the first time
Trustpilot