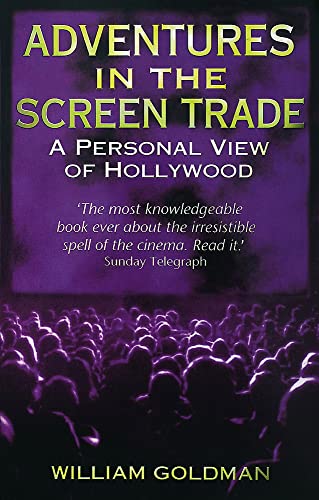 Adventures In The Screen Trade by William Goldman

From the writer of "Butch Cassidy and the Sundance Kid", "All the President's Men" and "Marathon Man", Oscar-winning screen writer William Goldman presents his memories and views of movie-making, and of acting greats such as Redford, Olivier, Newman and Hoffman.

Adventures In The Screen Trade: A Personal View of Hollywood by William Goldman

'I don't know if it's ever been equalled: both a guide to how to write and a guide to how to navigate the experience of being a professional in the industry. Even though he existed at the most exalted level, it never felt like that. It felt democratic and egalitarian in the way he wrote. Before his book, people never really gave thought to screenwriters, their craft, or their place in the ecosystem of movie-making. Bill not only shone a light on that and inspired a whole new generation of writers, he also made movie-making and showbusiness understandable to a vast general audience' Peter Morgan, writer of The Crown and Frost/Nixon

As befits more than twenty years in Hollywood, Oscar-winning screenwriter William Goldman's sparkling memoir is as entertaining as many of the films he has helped to create. From the writer of Butch Cassidy and the Sundance Kid, All the President's Men and Marathon Man, Adventures in the Screen Trade is an intimate view of movie-making, of acting greats such as Redford, Olivier, Newman and Hoffman, and of the trials and rewards of working inside the most exciting business in the world.

This is the real Hollywood. * DAILY TELEGRAPH *
William Goldman's book is the best I have read on Hollywood. * DAILY MAIL *
Fast and witty...a brave and very funny book. * Time Out *
William Goldman was a screenwriter on such films as Butch Cassidy and the Sundance Kid and All the President's Men. He lives in New York City.
GOR008489214
9780349107059
034910705X
Adventures In The Screen Trade: A Personal View of Hollywood by William Goldman
William Goldman
Used - Like New
Paperback
Little, Brown Book Group
1996-03-07
432
N/A
Book picture is for illustrative purposes only, actual binding, cover or edition may vary.
The book has been read, but looks new. The book cover has no visible wear, and the dust jacket is included if applicable. No missing or damaged pages, no tears, possible very minimal creasing, no underlining or highlighting of text, and no writing in the margins
Trustpilot