Iolani; or, Tahiti as It Was Wilkie Collins 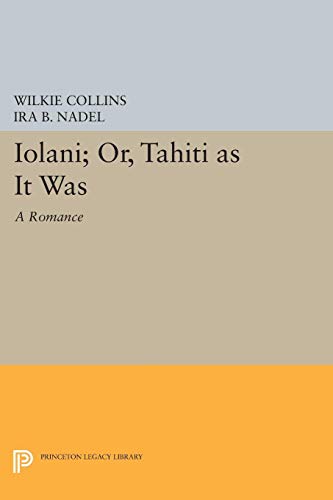 Iolani; or, Tahiti as It Was by Wilkie Collins

This is Wilkie Collins's earliest novel, written 150 years ago in the 1840s. It is a tale of terror and suspense, bravery and betrayal, set against the lush backdrop of Tahiti, telling the story of the diabolical high priest, Iolani and the heroic young woman, Idia, who bears his child.

Iolani; or, Tahiti as It Was: A Romance by Wilkie Collins

Written 150 years ago, never published, and presumed lost for nearly a century, Wilkie Collins's earliest novel now appears in print for the first time. Iolani is a sensational romance--a tale of terror and suspense, bravery and betrayal, set against the lush backdrop of Tahiti. The book's complicated history is worthy of a writer famous for intricate plots hinging on long-kept secrets. Collins wrote the book as a young man in the early 1840s, twenty years before The Moonstone and The Woman in White made his name among Victorian novelists. He failed to find a publisher for the work, shelved the manuscript for years, and eventually gave it to an acquaintance. It disappeared into the hands of private collectors and remained there--acquiring mythical status as a lost novel--from the turn of the century until its sudden appearance on the rare book market in New York in 1991. This first edition appears with the permission of the new owners, who keep the mystery alive by remaining anonymous.

The novel is set in Tahiti prior to European contact. It tells the story of the diabolical high priest, Iolani , and the heroic young woman, Idua, who bears his child. Determined to defy the Tahitian custom of killing firstborn children, Idua and her friend Aimata flee with the baby and take refuge among Iolani's enemies. The vengeful priest pursues them, setting into motion a plot that features civil war, sorcery, sacrificial rites, wild madmen, treachery, and love. Collins explores themes that he would return to again and again in his career: oppression by sinister, patriarchal figures; the bravery of forceful, unorthodox women; the psychology of the criminal mind; the hypocrisy of moralists; and Victorian ideas of the exotic. As Ira Nadel shows in his introduction, the novel casts new light on Collins's development as a writer and on the creation of his later masterpieces. A sample page from the manuscript appears as the frontispiece to this edition. The publication of Iolani is a major literary event: a century and half late, Wilkie Collins makes his literary debut.

The Princeton Legacy Library uses the latest print-on-demand technology to again make available previously out-of-print books from the distinguished backlist of Princeton University Press. These editions preserve the original texts of these important books while presenting them in durable paperback and hardcover editions. The goal of the Princeton Legacy Library is to vastly increase access to the rich scholarly heritage found in the thousands of books published by Princeton University Press since its founding in 1905.

"Wilkie Collins has a particular gift for rendering striking locations and for conveying a strong sense of weather and mood. It is this gift which sets him apart form other sensation novelists of the Victorian period. . . . [He] recreates the lush verdure, mountains, waterfalls and lakes of Tahiti in a strongly romantic style."---Leonee Ormond, Literary Review
"It is dramatic and picturesque. It has the immense merit T.S. Eliot found in his later works, 'of never being dull'. Most significantly, it has a spunky heroine of unconventional morality."---Lynne Truss, The Times
"There are plenty of characteristic Collinsian mysteries. . . . [F]or anyone who enjoys Collins's mature work, it is intriguing to see how many of his later preoccupations appear in Iolani."---Catherine Peters, The Sunday Telegraph
"It is not an exaggeration to claim that the resurfacing of Iolani, the first stab at fiction by a major Victorian novelist, is a literary event of genuine importance."-Glenn Horowitz, Bookseller, New York.
GOR003069318
9780691034461
069103446X
Iolani; or, Tahiti as It Was: A Romance by Wilkie Collins
Wilkie Collins
Princeton Legacy Library
Used - Very Good
Hardback
Princeton University Press
1999-04-04
256
N/A
Book picture is for illustrative purposes only, actual binding, cover or edition may vary.
This is a used book - there is no escaping the fact it has been read by someone else and it will show signs of wear and previous use. Overall we expect it to be in very good condition, but if you are not entirely satisfied please get in touch with us
Trustpilot