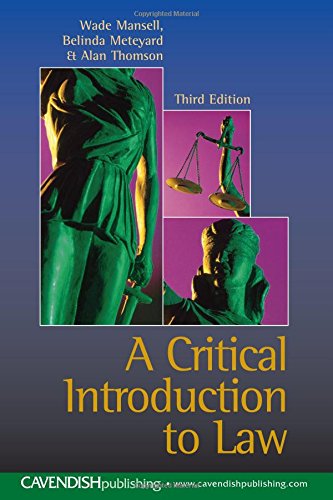 The aim of this text is to attempt to understand the role of law in the wider world rather than simply in its own terms. Law is considered as ideology and as politics, and a political critique of law's role in facilitating a capitalist world is presented.

This book challenges the usual introductions to the study of law. It argues that law is inherently political and reflects the interests of the few even while presenting itself as neutral. It considers law as ideology and as politics, and critically assesses its contribution to the creation and maintenance of a globalized and capitalist world. The clarity of the arguments are admirably suited to provoking discussions of the role of law in our contemporary world. This third edition provides contemporary examples to sustain the arguments in their relevance to the twenty-first century.

The book includes an analysis of the common sense of law; the use of anthropological examples to gain external perspectives of our use and understanding of law; a consideration of central legal concepts, such as order, rules, property, dispute resolution, legitimation and the rule of law; an examination of the role of law in women's subordination and finally a critique of the effect of our understanding of law upon the wider world. This book is ideal for undergraduate and postgraduate students reading law.

'All in all,this is a necessary legal book, not least as an antidote to the standard views of coteries of black letter lawyers who do not feel the need to question the political or other appropriateness of their legal activity.' Anglo-American Law Review. 'In the "Acknowledgements" to their Third Edition, Wade Mansell, Belinda Meteyard and Alan Thomson write, "A review of the first edition stated, 'A CRITICAL INTRODUCTION TO LAW will particularly appeal to the iconoclastic tendencies of many young people.' We hope it still does" (p.ix). This reviewer agrees with the first and reiterates the appeal that this book will have to the younger readers who seek alternative perspectives to studying law. Although I did not have the good fortune of reading earlier editions of the text, and so cannot compare the third edition to earlier ones, I can say that the authors do a thoroughly engaging job of contextualizing Western practices of law and inviting an intellectually challenging discussion of legal practices in the particular but arbitrary Western way. The book is not for a typical undergraduate audience. It is intended for the not-yet-indoctrinated beginning law student, and for that audience the book is particularly well-suited. The reader needs little or no academic experience with law; a simple cultural understanding is all that is necessary. Although the early law student would be an appropriate audience, I suspect the book will be selected more often for Law and Society, Socio-Legal, Sociology of Law, and similar graduate seminars. These will also provide excellent audiences for the book. The authors' intention with this book is to reveal the political element of law and to present the implications accompanying the recognition that law is neither culture-free nor politically neutral. The authors reveal that law, rather than existing as a neutral set of rules to create justice, "is, in reality artificial, historically and culturally contingent, and the embodiment of only a particular version of right, namely that of formal equality before the law" (p.161). This is accomplished in the first three chapters, where the authors use a variety of existing anthropological studies to assess the cultural component of law. A variety of different cultures' dispute resolution frameworks are contrasted and compared (without explicit value judgment) to Western notions of court arbitration and legal proceedings. Each example drives home the crucial point: law is not separate from society. Rather, law only becomes meaningful within the parameters of a particular socio-cultural context. The book would surely be thought provoking to nearly any social science scholar of law and would make a potentially eye-opening early text for law students. The ideas set forth are sure to generate discussion, whether among the iconoclastic youthful audience or their more established yet still critical counterparts.' Law Politics Book Review, Vol. 14 No.12 (December 2004), pp.956-960 '...very good and a pleasure to read...required bedtime - and perhaps more importantly wake-up-reading for all students of law. A Critical Introduction to Law is the companion volume to Kent Law School's impressive first year course of the same name, although it is equally valuable outside that particular setting and would fit readily into reading lists for any other critical law course of a theoretical, anthropological or contextual bent. The authors state a number of rationales for their critical introduction, but primary among them seems to be the aim of encouraging students to question assumptions about the law before they start to (are trained to, socialised to, indoctrinated to) 'think like a lawyer.' This involves questioning the law's apparent 'distinctiveness' and its 'self-proclaimed self-containment,' appreciating its social and cultural contingency, challenging its apparently unquestionable monopoly over neutral and rational truth and engaging in an overtly political critical analysis of law (in general and, specifically, the common law). Recognising at the outset the potential charge of over-simplicity, the authors state their preference for 'simple clarity' over 'complex opacity': while it has to be said that in places huge topics are indeed condensed to a few lines and juxtapositions drawn rather hastily, as an introductory text, the author's simple clarity of explanation and argumentation are to be welcomed. Cambrian Law Review, 2005. Dr Stephen Skinner. Lecturer in Law, Department of Law, University of Wales, Aberystwyth.
Wade Mansell, Belinda Meteyard, and Alan Thomson, all at the University of Kent Law School.
The Common Sense of Law; Law, Order and Reality; Reality, Anthropology and Dispute Resolution; Making Rules, Making Property and Translating Disputes; Defining Disputes and Comprehending the World; Women and Subordination; Patriarchal Relations and Marriage; Men, Women, Work and Law; The Wider Implications of the Rule of Law; Legitimation, Sovereignty and Globalisation; Equality and the Rule of Law; Reconsiderations.
GOR002201589
9781859418925
1859418929
Critical Introduction to Law by Wade Mansell (University of Kent, UK)
Wade Mansell (University of Kent, UK)
Used - Very Good
Paperback
Taylor & Francis Ltd
2004-06-25
208
N/A
Book picture is for illustrative purposes only, actual binding, cover or edition may vary.
This is a used book - there is no escaping the fact it has been read by someone else and it will show signs of wear and previous use. Overall we expect it to be in very good condition, but if you are not entirely satisfied please get in touch with us
Trustpilot