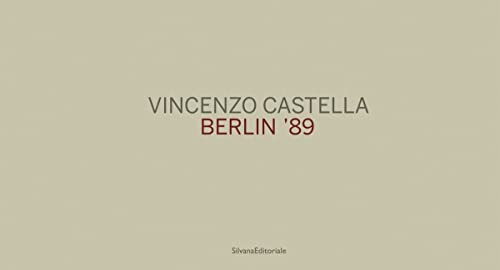 Presents previosuley unpublished photographs taken by Vincenzo Castella during his stay in Berlin, Germany. Text in English, German and Italian.

The landscape and architecture of a city like Berlin possess a great deal of under-track information. Inexplicable, yet perceptible, sometimes barely whispered. - Vincenzo Castella

Vincenzo Castella went to Berlin for the first time between August and September 1989, without imagining that an epochal turning point was preparing in that city, with the imminent fall of the Wall, on 9th November 1989.

The volume publishes for the first time the shots of that residency. A photographic cycle which, although presenting itself as a 'digression, an experiment with open outcomes' as explained by Frank Boehm in his text, with respect to the themes of his research at the time is fully inserted in a wider reflection on landscape, understood as a context built and modified by man, which is also the common thread of all of Castella's oeuvre.

For today's readers, this is not just an unpublished visual document that, through a silent and essential revival, gives us a glimpse of how the city looked before history intervened to cut its boundaries, but also a crucial element to approach and deepen the work of one of the most appreciated masters of contemporary photography.

Text in English, German and Italian.

Vincenzo Castella (Naples, 1952) lives in Milan. In 1975 he photographed the transformations of the environment, architecture, urban contamination, the industrial scene and the landscape. In '98 the photographic series on buildings began. His research is about distance and dislocation, language analysis and vision. Numerous exhibitions have been presented in Italy and abroad. His works are also present in public and private collections, such as the Tate Collection and the Deutsche Bank Collection.
NPB9788836645336
9788836645336
883664533X
Vincenzo Castella: Berlin 89 by Vincenzo Castella
Vincenzo Castella
New
Hardback
Silvana
2019-12-11
96
N/A
Book picture is for illustrative purposes only, actual binding, cover or edition may vary.
This is a new book - be the first to read this copy. With untouched pages and a perfect binding, your brand new copy is ready to be opened for the first time
Trustpilot