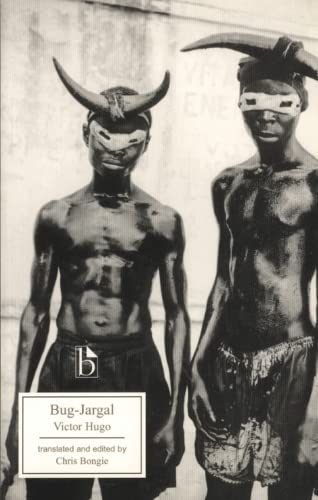 One of the most important works of ninteenth-century colonial fiction, and quite possibly the most sustained novelistic treatment of the Haitian Revolution by a major European author. This edition makes Hugo's novel available in a completely new English translation, the first in over one hundred years.

Victor Hugo's Bug-Jargal (1826) is one of the most important works of nineteenth-century colonial fiction, and quite possibly the most sustained novelistic treatment of the Haitian Revolution by a major European author. This Broadview edition makes Hugo's novel available in a completely new English translation, the first in over one hundred years. Set in 1791, during the first months of a slave revolt that would eventually lead to the creation of the black republic of Haiti in 1804, Bug-Jargal is a stirring tale of interracial friendship and rivalry, a provocative account of the ties that bind a young Frenchman to one of the rebel leaders and the tragic misunderstandings that threaten to sever those ties completely.

This Broadview edition contains a critical introduction and a broad selection of appendices, including Hugo's never-before-translated 1820 short story Bug-Jargal, contemporary reviews of the novel, documents pertaining to the young Hugo's poetics and politics, and selections from his source materials about the Haitian Revolution.

This superb edition of Bug-Jargal, which includes a wealth of contextualizing documentation, makes Hugo's early representations of race and revolution fully accessible to a contemporary English-language audience. Bongie's critical introduction, translations of both the 1826 novel and the original 1820 short story, and incorporation of contemporary reviews, literary sources, and historical materials reinvigorate Hugo's work and enable the reader to engage with it from a fresh, postcolonial perspective. - Kathryn M. Grossman, Pennsylvania State University

Victor Hugo's early novel of the Haitian Revolution has taken on a new significance in our postcolonial age preoccupied with race, subaltern resistance, and hybridity. Chris Bongie provides a richly contextualized version that will appeal to historians, literary scholars, and general readers alike. It combines meticulous documentation and a provocative argument about the conservative young poet's ambivalent rendering of this 'struggle of giants,' which was written at a turning point in his political development. - David Geggus, University of Florida

Chris Bongie gives a highly readable and accurate translation of the novel, its 1820 short-story version, and of the supporting documents. He also devotes much of the introduction and notes to demonstrating how Hugo had pieced together portions of the novel from historical sources. [The translation and choice of documents] indicate the Broadview edition's scholarly and pedagogical uses. - Nineteenth-Century French Studies

Chris Bongie is a Professor of English at Queen's University, Kingston. He is the author of Exotic Memories: Literature, Colonialism, and the Fin de Siecle and Islands and Exiles: The Creole Identities of Post/Colonial Literature, both from Stanford University Press.

Acknowledgements
Introduction
Victor Hugo: A Brief Chronology
A Note on the Text

Appendix B: The Saint Domingue Revolt (1845)

GOR011343089
9781551114460
1551114461
Bug-Jargal by Victor Hugo
Victor Hugo
Used - Very Good
Paperback
Broadview Press Ltd
20040726
344
N/A
Book picture is for illustrative purposes only, actual binding, cover or edition may vary.
This is a used book - there is no escaping the fact it has been read by someone else and it will show signs of wear and previous use. Overall we expect it to be in very good condition, but if you are not entirely satisfied please get in touch with us
Trustpilot