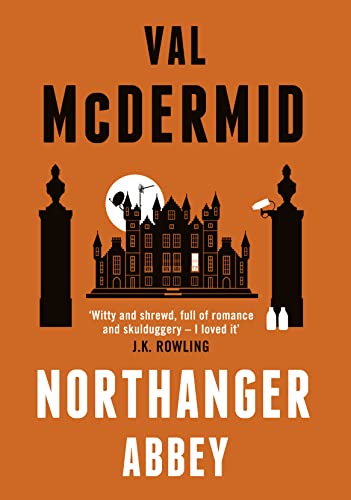 Seventeen-year-old Catherine `Cat' Morland has led a sheltered existence in rural Dorset, a life entirely bereft of the romance and excitement for which she yearns. So when Cat's wealthy neighbours, the Allens, invite her to the Edinburgh Festival, she is sure adventure beckons.

Edinburgh initially offers no such thrills: Susie Allen is obsessed by shopping, Andrew Allen by the Fringe. A Highland Dance class, though, brings Cat a new acquaintance: Henry Tilney, a pale, dark-eyed gentleman whose family home, Northanger Abbey, sounds perfectly thrilling. And an introduction to Bella Thorpe, who shares her passion for supernatural novels, provides Cat with a like-minded friend. But with Bella comes her brother John, an obnoxious banker whose vulgar behaviour seems designed to thwart Cat's growing fondness for Henry.

But Cat gets far more than she bargained for in this isolated corner of the Scottish Borders. The real world outside the pages of a novel proves to be altogether more disturbing than the imagined world within...

'Val McDermid's brilliant re-working of Jane Austen's original shows that innocent, bookish girls in thrall to the supernatural have changed surprisingly little in two centuries. Witty and shrewd, full of romance and skulduggery - I loved it.'
J.K. ROWLING

`I picked up Northanger Abbey one evening and didn't stop reading until I'd finished it. It's an exquisitely realised tale of the uncertainty and brutality of teenage years told with the lightness of touch and humour that Val is famous for. Utter brilliance from McDermid' SUSAN CALMAN

`McDermid's reworking of the original novel is intelligent, amusing and well-written... captures beautifully how it feels to be a teenager... McDermid is a subtle and witty writer and it's hard to imagine a better evocation of the spirit of the original' THE TIMES

`A fun rendering... McDermid's Abbey, with its passageways and dark corners, is fantastic, and this novel is a lark' SUNDAY TIMES

`McDermid's great virtue is to have made Austen's characters seem fresh in the way they would have been for her first readers... I can imagine Jane herself applauding' SUNDAY EXPRESS

`Note perfect... breezy, vital, inventive... Her obvious pleasure in the task is as contagious as Austen's wit' THE SCOTSMAN

Praise for The Austen Project:

`The Austen Project is a breathtaking tribute to Jane Austen. I can't wait to read the other five "updates" while being reminded to reread, joyfully, the originals' Washington Post

Val McDermid is the author of twenty-five bestselling novels, which have been translated into thirty languages, and have sold over ten million copies. She has won many awards internationally, including the CWA Gold Dagger for best crime novel of the year. She was inducted into the ITV3 Crime Thriller Awards Hall of Fame in 2009 and was the recipient of the CWA Diamond Dagger in 2010, awarded for sustained excellence and significant contribution to crime fiction. She has a son and a dog, and lives in the north of England.

GOR005660784
9780007504244
0007504241
Northanger Abbey by Val McDermid
Val McDermid
Used - Very Good
Hardback
HarperCollins Publishers
2014-03-24
352
N/A
Book picture is for illustrative purposes only, actual binding, cover or edition may vary.
This is a used book - there is no escaping the fact it has been read by someone else and it will show signs of wear and previous use. Overall we expect it to be in very good condition, but if you are not entirely satisfied please get in touch with us
Trustpilot