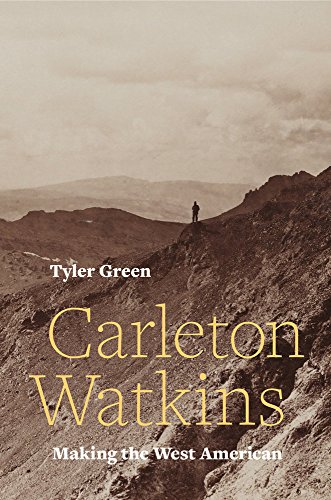 Best Books of 2018-The Guardian

Carleton Watkins (1829-1916) is widely considered the greatest American photographer of the nineteenth century and arguably the most influential artist of his era. He is best known for his pictures of Yosemite Valley and the nearby Mariposa Grove of giant sequoias.

Watkins made his first trip to Yosemite Valley and Mariposa Grove in 1861 just as the Civil War was beginning. His photographs of Yosemite were exhibited in New York for the first time in 1862, as news of the Union's disastrous defeat at Fredericksburg was landing in newspapers and while the Matthew Brady Studio's horrific photographs of Antietam were on view. Watkins's work tied the West to Northern cultural traditions and played a key role in pledging the once-wavering West to Union.

Motivated by Watkins's pictures, Congress would pass legislation, later signed by Abraham Lincoln, that preserved Yosemite as the prototypical national park, the first such act of landscape preservation in the world. Carleton Watkins: Making the West American includes the first history of the birth of the national park concept since pioneering environmental historian Hans Huth's landmark 1948 Yosemite: The Story of an Idea.

Watkins's photographs helped shape America's idea of the West, and helped make the West a full participant in the nation. His pictures of California, Oregon, and Nevada, as well as modern-day Washington, Utah, and Arizona, not only introduced entire landscapes to America but were important to the development of American business, finance, agriculture, government policy, and science. Watkins's clients, customers, and friends were a veritable who's who of America's Gilded Age, and his connections with notable figures such as Collis P. Huntington, John and Jessie Benton Fremont, Eadweard Muybridge, Frederick Billings, John Muir, Albert Bierstadt, and Asa Gray reveal how the Gilded Age helped make today's America.

Drawing on recent scholarship and fresh archival discoveries, Tyler Green reveals how an artist didn't just reflect his time, but acted as an agent of influence. This telling of Watkins's story will fascinate anyone interested in American history; the West; and how art and artists impacted the development of American ideas, industry, landscape, conservation, and politics.
A fascinating and indispensable book. -- Christopher Knight, * Los Angeles Times *
The more that Green reveals about this enigmatic figure the more you want to see. As Green does with the events of Watkins' life, he builds a web of beauty and risk, of boom and bust, and of serenity and exploitation in and in between Watkins' pictures. There are still plenty of shadows, but Green puts us in a better place to see into them. -- David D'Arcy, * San Francisco Chronicle *
The book is convincing in its central argument, relating the sublimity of Watkins's photography to American Transcendentalism, particularly the poetry of Emerson. It is also quite beautiful on the meanings of early Californian culture. In this sense Green's research is not just about Watkins, but about the significance of the American West, and in some ways the definition of America itself. Ultimately, the book makes a strong case for photography as the first and most American art: much like Watkins's work, Making the West American is at once technical and transcendent. * Aperture *
This is highly effective scholarship that maps out art, politics and science in which Watkins takes his place alongside his fellow photographer Eadweard Muybridge. * Art Newspaper *
Carleton Watkins is a treasure of a book, which hopefully will bring more attention to this particular photographer's work and achievement. With its numerous illustrations of photographs discussed by the author, in all likelihood a reader will come away with a deep sense of appreciation of both the artist in question but also his biographer. -- Joerg M. Colberg, * Conscientious Photography Magazine *
Tyler Green's marvellous biography of the gold rush photographer Carleton Watkins, who more or less created the image of America's midwest, is all startling drama in both the life and art. -- Laura Cumming, * The Guardian *
Green's clearly written chronological narrative traces Watkins's life and career. His inclusion of many of Watkins's most notable photographs enriches the portrait of a photographer whose work left an indelible mark on an expanding country. This is a book to be appreciated both textually and visually.
* Foreword Reviews *
The most meticulously researched portrait of the photographer to date, adding a treasure trove of compelling new details. . . . Green skillfully weaves a web of historical context around Watkins, placing him and his photographs as connectors to major cultural, political, and industrial changes, most especially the burgeoning conservation movement, the railroad industry and settlement of the West, and the men and women who shaped the region. * Oregon Historical Quarterly *
Tyler Green is an award-winning critic and historian. He is the producer and host of The Modern Art Notes Podcast, America's most popular audio program on art, and was previously the editor of the website Modern Art Notes, which published from 2001 to 2014. This is his first book.
List of Illustrations
Acknowledgments

List of Abbreviations
Notes
Bibliography
Index
NPB9780520287983
9780520287983
0520287983
Carleton Watkins: Making the West American by Tyler Green
Tyler Green
New
Hardback
University of California Press
2018-10-16
536
N/A
Book picture is for illustrative purposes only, actual binding, cover or edition may vary.
This is a new book - be the first to read this copy. With untouched pages and a perfect binding, your brand new copy is ready to be opened for the first time
Trustpilot