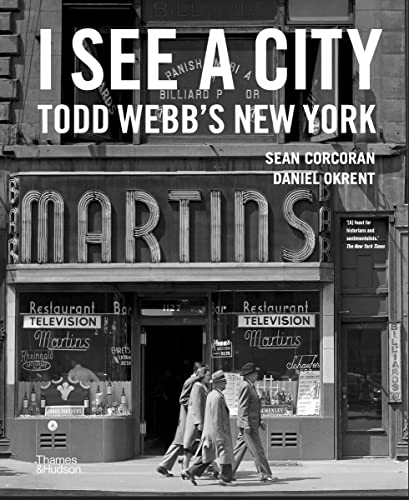 I See a City: Todd Webb's New York focuses on the work of photographer Todd Webb produced in New York City in the 1940s and 1950s. Webb photographed the city day and night, in all seasons and in all weather. Buildings, signage, vehicles, the passing throngs, isolated figures, curious eccentrics, odd corners, windows, doorways, alleyways, squares, avenues, storefronts, uptown and downtown, from the Brooklyn Bridge to Harlem. He created a richly textured portrait of the everyday life and architecture of New York. Webb's work is clear, direct, focused, layered with light and shadow, and captures the soul of these places shaped by the friction and frisson of humanity.

A native of Detroit, Webb studied photography in the 1930s under the guidance of Ansel Adams at the Detroit Camera Club, served as a navy photographer during World War II, and then went on to become a successful postwar photographer. His work is in many museum collections, including The Museum of Modern Art in New York and the National Gallery of Art in Washington.

With 167 illustrations
'A feast for historians and sentimentalists' - The New York Times
Todd Webb (1905-2000) was a renowned American photographer. Sean Corcoran is the Curator of Prints and Photographs at the Museum of the City of New York. Daniel Okrent, a writer and editor, is best known for having served as the first public editor of The New York Times.
'A City Seen: Todd Webb's Postwar New York', Sean Corcoran * 'My City Lost and Found', Daniel Okrent * The Plates
NPB9780500545522
9780500545522
0500545529
I See a City: Todd Webb's New York by Todd Webb
Todd Webb
New
Hardback
Thames & Hudson Ltd
2021-06-03
176
N/A
Book picture is for illustrative purposes only, actual binding, cover or edition may vary.
This is a new book - be the first to read this copy. With untouched pages and a perfect binding, your brand new copy is ready to be opened for the first time
Trustpilot