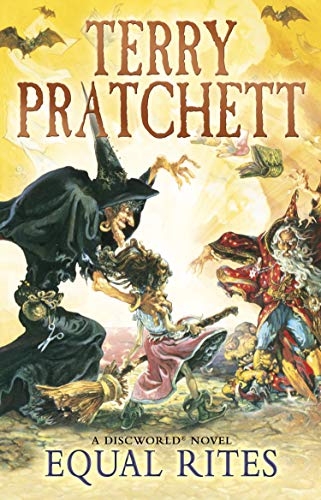 The Discworld is very much like our own - if our own were to consist of a flat planet balanced on the back of four elephants which stand on the back of a giant turtle, that is .

The Discworld is very much like our own - if our own were to consist of a flat planet balanced on the back of four elephants which stand on the back of a giant turtle, that is . . .

They say that a little knowledge is a dangerous thing, but it's not half so bad as a lot of ignorance.

The last thing the wizard Drum Billet did, before Death laid a bony hand on his shoulder, was to pass on his staff of power to the eighth son of an eighth son.

Unfortunately for his colleagues in the chauvinistic (not to say misogynistic) world of magic, he failed to check that the baby in question was a son.

Everybody knows that there's no such thing as a female wizard. But now it's gone and happened, there's nothing much anyone can do about it.

The Discworld novels can be read in any order but Equal Rites is the first book in the Witches series.

If you are unfamiliar with Pratchett's unique blend of philosophical badinage, you are on the threshold of a mind-expanding opportunity * Financial Times *
Persistently amusing, good-hearted and shrewd * The Sunday Times *
Pratchett keeps getting better and better...It's hard to think of any humorist writing in Britain today who can match him * Time Out *
Terry Pratchett was the acclaimed creator of the global bestselling Discworld series, the first of which, The Colour of Magic, was published in 1983. In all, he was the author of over fifty bestselling books. His novels have been widely adapted for stage and screen, and he was the winner of multiple prizes, including the Carnegie Medal, as well as being awarded a knighthood for services to literature. He died in March 2015.
GOR006467206
9780552166614
0552166618
Equal Rites: (Discworld Novel 3) by Terry Pratchett
Terry Pratchett
Discworld Novels
Used - Like New
Paperback
Transworld Publishers Ltd
2012-06-21
288
N/A
Book picture is for illustrative purposes only, actual binding, cover or edition may vary.
The book has been read, but looks new. The book cover has no visible wear, and the dust jacket is included if applicable. No missing or damaged pages, no tears, possible very minimal creasing, no underlining or highlighting of text, and no writing in the margins
Trustpilot