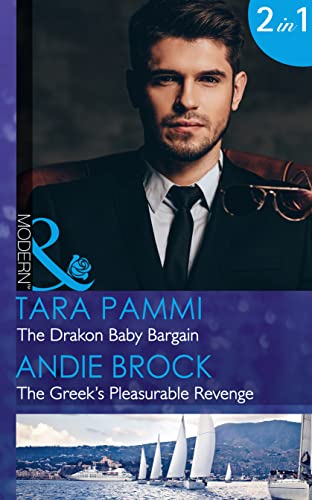 Illegitimate and overlooked, Eleni, Princess of Drakon, yearns for a family. And at a masquerade ball one stolen kiss with a stranger sparks an opportunity! Gabriel Marquez wants her to care for his child-could this be Eleni's chance to strike a deal of her own?

Gabriel, Drakon's biggest investor, is shocked by Eleni's bold bargaining...but a convenient marriage would be advantageous to them both! He'll gain a stand-in mother for his daughter, and Eleni will have the baby she longs for. Except Gabriel hasn't predicted the fire raging between them...one which will bind them together for ever!

The last person Calista expects - or wants - to see at her father's graveside is arrogant billionaire Lukas Kalanos. Five years earlier, after an affair that stole her innocence, Lukas betrayed her family and disappeared, leaving Callie with much more than a broken heart...

Seeking vengeance on the Gianopoulous family for framing him, Lukas finds Callie ripe for his seduction. She will pay for past wrongdoings - between his sheets! But discovering that Callie has had his child is a surprise that changes Lukas pleasurable plans of revenge...into a hunger to make her his own!

Tara Pammi can't remember a moment when she wasn't lost in a book, especially a romance which, as a teenager, was much more exciting than mathematics textbook. Years later Tara's wild imagination and love for the written word revealed what she really wanted to do: write! She lives in Colorado with the most co-operative man on the planet and two daughters. Tara loves to hear from readers and can be reached at tara.pammi@gmail.com or her website www.tarapammi.com. Andie Brock started inventing imaginary friends around the age of four and is still doing that today; only now the sparkly fairies have made way for spirited heroines and sexy heroes. Thankfully she now has some real friends, as well as a husband and three children, plus a grumpy but lovable cat. Andie lives in Bristol and when not actually writing, could well be plotting her next passionate romance story.
GOR008398727
9780263925265
0263925269
The Drakon Baby Bargain: The Drakon Baby Bargain (The Drakon Royals) / The Greek's Pleasurable Revenge (Secret Heirs of Billionaires) (Mills & Boon Modern) by Tara Pammi
Tara Pammi
Used - Very Good
Paperback
HarperCollins Publishers
2017-06-01
384
N/A
Book picture is for illustrative purposes only, actual binding, cover or edition may vary.
This is a used book - there is no escaping the fact it has been read by someone else and it will show signs of wear and previous use. Overall we expect it to be in very good condition, but if you are not entirely satisfied please get in touch with us
Trustpilot