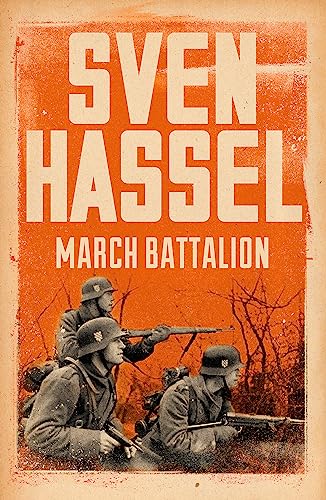 A famously gritty war novel set on the Eastern Front and a gripping insight into the brutalities of war, now relaunched with a stunning new look.

Sven Hassel and his comrades are once more hurled into the ferocity of the frontline.

The Eastern Front is a sight of unprecedented destruction. The soldiers there - the tank battalions of Hitler's penal regiments - are considered expendable by the German high command.

This is a gripping testament to the soldiers sacrificed on the Russian Front.

Sven Hassel is one of the best European novelists around, with a flair for excitement that has few equals--STAFFORDSHIRE EVENING STANDARD
In essence this is an expose of the absurdity of war, and a moving plea for peace. As such, it takes its rank with far milder books, such as ALL QUIET ON THE WESTERN FRONT--NEWSDAY
He is graphic, at times brilliantly so, but never brutal or bitter. He is, too, a first rate storyteller--WASHINGTON POST
Born in 1917 in Fredensborg, Denmark, Sven Hassel joined the merchant navy at the age of 14. He did his compulsory year's military service in the Danish forces in 1936 and then, facing unemployment, joined the German army. He served throughout the Second World War on all fronts except North Africa. When the war ended in 1945 he was transferred between Russian, American and French prison camps, and upon returning to Denmark, was sentenced to 10 years in prison for treason. He began writing LEGION OF THE DAMNED during his time as a prisoner of war. His 14 Second World War books, which draw on his own encounters and experiences as a soldier, have sold over 53 million copies worldwide and have been published in more than 50 countries. He peacefully passed away in Barcelona in 2012, where he had resided since 1964.
GOR006118930
9781780228167
1780228163
March Battalion by Sven Hassel
Sven Hassel
Sven Hassel War Classics
Used - Very Good
Paperback
Orion Publishing Co
2014-05-29
224
N/A
Book picture is for illustrative purposes only, actual binding, cover or edition may vary.
This is a used book - there is no escaping the fact it has been read by someone else and it will show signs of wear and previous use. Overall we expect it to be in very good condition, but if you are not entirely satisfied please get in touch with us
Trustpilot