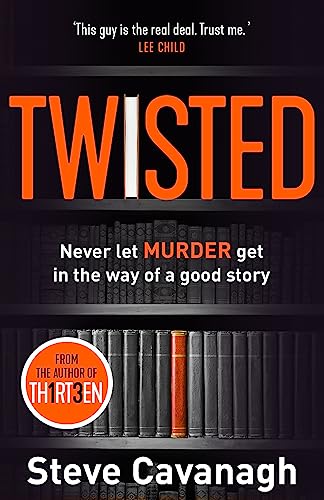 The brand new novel from Steve Cavanagh, author of THIRTEEN.

BEFORE YOU READ THIS BOOK
I WANT YOU TO KNOW THREE THINGS:

After you've read this book, you'll know: the truth is far more twisted...

'This guy is the real deal' Lee Child

A fantastic standalone thriller. Punchy, ridiculously gripping, fast-paced, clever. Beautifully-plotted and incredibly fun to read. He's done it again. SUPERB. * Will Dean *
Another powerhouse thriller. * Ian Rankin *
A fantastic read. Guaranteed to be one of the big books of 2019. You won't be able to put this down. It's about time we found out the truth about JT LeBeau... * Luca Veste *
A corkscrewing rollercoaster of thrills, switchbacks, loop-de-loops and screaming good fun. Add it to your wish list! * Mark Edwards *
Steve Cavanagh must have sold his soul to the devil at the crossroads outside of Rosedale, Mississippi in exchange for becoming one of the world's best crime writers. Just read TWISTED and he's done it again. As edgy, gripping & brilliant as Thirteen. Steve is 5/5 * Adrian McKinty *
Which is the twistiest thing ever? A Twister lolly? A game of Twister? Twister, the movie, starring Bill Paxton and Helen Hunt? If you ask me, it's Twisted by Steve Cavanagh! It's got more twists than a Curly Wurly! * Stuart Neville *
In the words of the great Jim Ross, "Good Gawd Almighty". What a heck of a year or so for Steve Cavanagh: his fourth novel THIRTEEN sold like hotcakes and was on many 'best of the year' lists, his third tale THE LIAR won the CWA Gold Dagger, and now this. Best yet? Devoured it in a day. * Craig Sisterson *
Looks set to cement his status as heir apparent to John Grisham. * Daily Express *
This killer thriller more than lives up to its name with twists that left me breathless. A surefire hit from this master of the genre. * Steph Broadribb *
Another cracking read which more than lives up to its name. Do yourself a favour and pick up a copy as soon as you can. * Brian McGilloway *
If you enjoyed Steve Cavanagh's last novel Thirteen, you'll love his latest, Twisted. A class act in every sense. * Paul Burston *
As nastily inventive as his highly successful Thirteen. * Sunday Express *
Outstanding. Totally absorbing and compelling. A masterpiece in thriller plotting - twists and turns at a ferocious pace, leading to a nail-biting conclusion. * Mel Sherrat *
Twisted and dark, another rip roaring rollercoaster ride. * Angela Clarke *
Brilliant and devilishly twisty and turny. * C.L. Taylor *
Very few know who bestselling mystery author J T LeBeau is, which is a mystery in itself. However, one woman thinks she's located him and believes him to be a lot closer to home than she imagined (or she'd like). The truth is a lot more complicated than that, which leads to interesting, engaging chapters that take you on such a journey that you're pleasantly unsettled throughout. Well worth a read. * Woman's Way *
Fiendishly good. A 5* thrill-ride of a read! * Marnie Riches *
Another taut, twisty thriller... This is one to lap up in one session. * Press Association *
Genius plotting from a criminal mastermind. * Erin Kelly *
With a plot that more than delivers, this book-within-a-book about a crime writer is a head-spinning must. * Woman and Home *
Another taut, twisty thriller. This is one to lap up in one session. * The Scotsman *
Twisted resembles a zingy Elmore Leonard noir caper, but with a bonus metafictional strand. * Sunday Times *
Twist follows ingenious twist as the truth unfurls ... excellent descriptive writing worthy of Raymond Chandler. The real magic is in Steve Cavanagh's hypnotic storytelling power and you'll gulp this down like it's the first Guinness after Lent. * Sunday Express *
A fast paced and surprising thriller ... you will not want to put this down. * The Lady *
Clever, chilling and high-octane. * Woman *
Most excellent thriller. Just as good as everyone says. Top stuff! * CJ Tudor *
And just when this reader thought he had the plot worked out, a killer final twist left me reeling. Twisted is the perfect summer holiday read from one of the UK's best thriller writers. * Daily Express *
More twists than a Curly Wurly * Belfast Telegraph *
Offers a fresh twist on the genre's well-worn format...Most of the fun in Twisted is following the convoluted plot, with its myriad switchbacks, fake-outs, red herrings and, you guessed it, twists and turns. Cavanagh keeps us guessing throughout * Irish Independent *
Steve Cavanagh was born and raised in Belfast before leaving for Dublin at the age of eighteen to study Law. He currently practices civil rights law and has been involved in several high profile cases; in 2010 he represented a factory worker who suffered racial abuse in the workplace and won the largest award of damages for race discrimination in Northern Ireland legal history. He holds a certificate in Advanced Advocacy and lectures on various legal subjects (but really he just likes to tell jokes). He is married with two young children. Follow Steve on Facebook at facebook.com/SSCav1 and Twitter @SSCav
GOR009689864
9781409170693
1409170691
Twisted: The Sunday Times Bestseller by Steve Cavanagh
Steve Cavanagh
Used - Very Good
Paperback
Orion Publishing Co
2019-01-24
352
N/A
Book picture is for illustrative purposes only, actual binding, cover or edition may vary.
This is a used book - there is no escaping the fact it has been read by someone else and it will show signs of wear and previous use. Overall we expect it to be in very good condition, but if you are not entirely satisfied please get in touch with us
Trustpilot