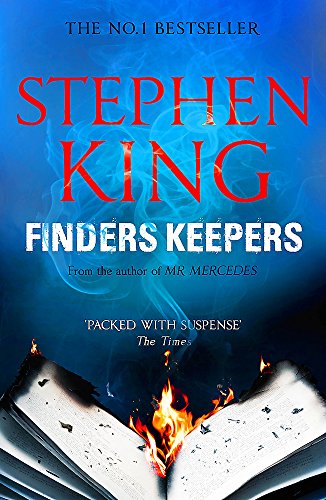 A riveting crime thriller about a reader whose obsession with a reclusive writer goes too far, featuring the same trio of unlikely and winning heroes King introduced in MR MERCEDES.

Morris Bellamy is a reader so obsessed by America's iconic author John Rothstein that he is prepared to kill for a trove of notebooks containing at least one more unpublished novel.

Pete Saubers, a boy whose father was brutally injured by a stolen Mercedes, discovers a buried trunk containing cash and Rothstein's notebooks.

After thirty-five years in prison, Morris is up for parole. And he's hell-bent on recovering his treasure.

Now it's up to retired detective Bill Hodges - running an investigative company called 'Finders Keepers' - to rescue Pete from an ever-more deranged and vengeful Morris...

Not since Misery has King written with such visceral power about a reader with such a dangerous obsession. Finders Keepers is spectacular suspense, and it is King writing about how literature shapes a life for good, for bad, for ever.

King has the popular novelist's gifts in spades - a flawless sense of pace, an ear for dialogue, an eye for the telling detail, a no-mess-no-fuss approach to characterisation -- Keith Miller * Spectator *
An almost constant build of momentum, growing in pace and tension until it finally explodes... manages to thrill with every page * Guardian *
A classic cat-and-mouse tale, this is King at his rip-roaring best * Mail on Sunday *
Fantastic...In part a love letter to literature, this is vintage King - jaw droppingly brutal but full of heart and humanity. Roll on the last in the trilogy * Sunday Mirror *
A remarkable display of storytelling. -- John Dugdale * Sunday Times *
It's expertly plotted, a series of pieces falling into place with almost audible satisfaction as the author burns towards his suitably horrific climax. -- Alison Flood * Observer *
This novel is slick, seamlessly crafted, shockingly gory and packed with suspense * The Times *
MR MERCEDES was a terrific thriller, and now there's a sequel. I squeak with glee. -- Natalie Haynes * Independent *
FINDERS KEEPERS is a first-rate crime thriller, but it's also to King's credit that, more than 40 years into his career, he continues to experiment, and his talent, curiosity, and generous, humane spirit show no signs of flagging. -- John Connolly * Irish Independent *
Unlike John Rothstein it seems Stephen King is determined to publish everything he can write. If books such as the effortlessly exciting FINDERS KEEPERS are the result, we should all be grateful. * Glasgow Herald *

Praise for MR MERCEDES:
'I challenge you not to read this book in one breathless sitting

* Guardian *
Stephen King might just be America's greatest living novelist . . . THE BEST THRILLER OF THE YEAR . . . Recommended to crime buffs and King fans alike. * Sunday Express *
A very remarkable and singular writer. He can catch dialogue, throw away an observation or mint a simile, sometimes, brilliantly . . . Storytelling is everything - and by golly does he know how to carry the reader. * Observer *
Expect page-turning suspense, jaw-dropping twists and all the addictive brilliance of a classic Stephen King. * FHM *
Deserves to be ranked alongside King's masterpieces * Daily Mail *
A thrilling cat-and-mouse game * Irish Mail on Sunday *
Stephen King is the author of more than sixty books, all of them worldwide bestsellers. His recent work includes Sleeping Beauties (co-written with his son Owen King), the short story collection The Bazaar of Bad Dreams, the Bill Hodges trilogy End of Watch, Finders Keepers, and Mr. Mercedes (an Edgar Award winner for Best Novel, and shortlisted for the CWA Gold Dagger Award). Many of King's books have been turned into celebrated films, television series and streamed events including The Shawshank Redemption, Gerald's Game and It. King is the recipient of the 2014 National Medal of Arts and the 2003 National Book Foundation Medal for Distinguished Contribution to American Letters. He lives in Bangor, Maine, with his wife, novelist Tabitha King.
GOR007406801
9781473698956
1473698952
Finders Keepers by Stephen King
Stephen King
Used - Very Good
Paperback
Hodder & Stoughton
2016-03-22
400
N/A
Book picture is for illustrative purposes only, actual binding, cover or edition may vary.
This is a used book - there is no escaping the fact it has been read by someone else and it will show signs of wear and previous use. Overall we expect it to be in very good condition, but if you are not entirely satisfied please get in touch with us
Trustpilot