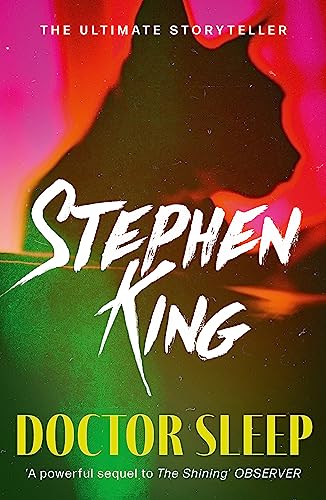 From master storyteller Stephen King, his unforgettable and terrifying stand-alone sequel to The Shining - an instant international No. 1 bestseller

Soon to be a major motion picture starring Ewan McGregor!

King says he wanted to know what happened to Danny Torrance, the boy at the heart of The Shining, after his terrible experience in the Overlook Hotel. The instantly riveting DOCTOR SLEEP picks up the story of the now middle-aged Dan, working at a hospice in rural New Hampshire, and the very special twelve-year old girl he must save from a tribe of murderous paranormals.

On highways across America, a tribe of people called The True Knot travel in search of sustenance. They look harmless - mostly old, lots of polyester, and married to their RVs. But as Dan Torrance knows, and tween Abra Stone learns, The True Knot are quasi-immortal, living off the 'steam' that children with the 'shining' produce when they are slowly tortured to death.

Haunted by the inhabitants of the Overlook Hotel where he spent one horrific childhood year, Dan has been drifting for decades, desperate to shed his father's legacy of despair, alcoholism and violence. Finally, he settles in a New Hampshire town, an AA community that sustains him and a job at a nursing home where his remnant 'shining' power provides the crucial final comfort to the dying. Aided by a prescient cat, he becomes 'Doctor Sleep.'

Then Dan meets the evanescent Abra Stone, and it is her spectacular gift, the brightest shining ever seen, that reignites Dan's own demons and summons him to a battle for Abra's soul and survival . . .

King's own supplies of creative steam show little sign of being depleted. * The Sunday Times *

A powerful sequel to The Shining

* Observer *
King finds a mode of the supernatural that has a melancholic beauty * Guardian, Book of the Week *
All the virtues of his best work * Margaret Atwood, New York Times *
A gripping, powerful novel, all the more so for being patently heartfelt * Financial Times *
King is a very remarkable and singular writer. He can catch dialogue, throw away an observation or mint a simile, sometimes, brilliantly...Storytelling is everything - and by golly does he know how to carry the reader. * Observer *
Doctor Sleep is King expertly returning to the milieu of his most beloved novels, combining not just elements from the original Shining but themes and imagery familiar from King's books, including Carrie, Salem's Lot, Firestarter and It. It also has a structure King has often utilised before, with a group of essentially good people having to band against a gang of baddies but within this structure King works masterful variations, showing just with a brilliant storyteller he is. When King is on form, as he is in Doctor Sleep, he has no rivals for sheer page-turning suspense. It is as addictive as anything he has written: a triumph from the world's finest horror novelist. * Sunday Express *
It's a gripping, powerful novel, all the more so for being patently heartfelt. * Financial Times *
King finds a mode of the supernatural that has a melancholic beauty while avoiding spiritualist blather * Guardian *
Doctor Sleep is a warm, entertaining novel by a man who is no longer the prisoner of his demons, but knows where to find them when he needs to call on them. * Daily Telegraph *
Thirty-six years on from his horror classic, THE SHINING, Stephen King's sequel shows he still has plenty of creative steam. * The Sunday Times *
King has written a sequel, the tale of what happened to little Danny when he grew up. Need one say more? It cannot fail...the best thing to emerge from King's glittering, warped imagination is of mundane, small-town America corrupted by hidden forces...you cannot but respect his ruthless expertise as a storyteller...even those of us who would never freely pick up a Stephen King must genuflect to a master. * The Times *
Stephen King's frightscapes are among the most incredible in literature, yet one believes in them unquestioningly. * Spectator *
Terrifying and, as always, brilliantly-crafted tale, you won't be left wanting. But you may be left scared. * Sun *
A magnificent sequel to one of the finest horror yarns written....Brilliant. * Daily Express *
highly anticipated sequel to his bestselling 1977 novel The Shining. * Daily Express Saturday Mag *
the book remains hopeful and hugely humane. -- John Connolly * Irish Times *
Doctor Sleep has a tightness, an economy, after some of the lengthier novels of recent years, but also a lightness of touch. It reads less like a horror novel than a thriller and ends on a scene of intimate and intense human contact, a gift of consolation at the moment of death. -- John Connolly * Irish Times *
King is too skilled a storyteller for Doctor Sleep to be anything other than unputdownable. * Mail On Sunday *
Both an excellent sequel to The Shining and a strong novel in its own right, this is one of King's best books in the last decade. * SciFi Bulletin *
Suspenseful, thrilling and packed with twists....an incredibly sincere piece of writing. * Time Out *
It still grips, just differently than the original. * Shortlist *
King still remains the daddy of them all. * Metro *
...the novel's deepest shiverings depend on no made-up devils. * Guardian *
For the truth is, there are few writers who have such a way with character (and that character delivered through authorial peeks into thought and feeling, is so important in his books)...Once his stories get their hooks into you, they're impossible to put down....The denouement of the novel takes place in autumn, and that's no coincidence. You can practically smell the leaf piles burning, their fragrant smoke mixed with that of funeral pyres. * sfx.co.uk *
This brilliant sequel....King [is] a genius at transforming the ordinary into the utterly horrific... * Evening Standard *
This is the master on top form, drawing his readers in with his amazing storytelling power - first with the tension, then with the richness and details of the scene-setting and characterisation. * Daily Mail *
Stephen King is the author of more than sixty books, all of them worldwide bestsellers. His recent work includes Sleeping Beauties (co-written with his son Owen King), the short story collection The Bazaar of Bad Dreams, the Bill Hodges trilogy End of Watch, Finders Keepers, and Mr. Mercedes (an Edgar Award winner for Best Novel, and shortlisted for the CWA Gold Dagger Award). Many of King's books have been turned into celebrated films, television series and streamed events including The Shawshank Redemption, Gerald's Game and It. King is the recipient of the 2014 National Medal of Arts and the 2003 National Book Foundation Medal for Distinguished Contribution to American Letters. He lives in Bangor, Maine, with his wife, novelist Tabitha King.
GOR005741470
9781444761184
1444761188
Doctor Sleep by Stephen King
Stephen King
The Shining
Used - Very Good
Paperback
Hodder & Stoughton
2014-05-22
512
Winner of This is Horror Novel of the Year 2013 (UK)
Book picture is for illustrative purposes only, actual binding, cover or edition may vary.
This is a used book - there is no escaping the fact it has been read by someone else and it will show signs of wear and previous use. Overall we expect it to be in very good condition, but if you are not entirely satisfied please get in touch with us
Trustpilot