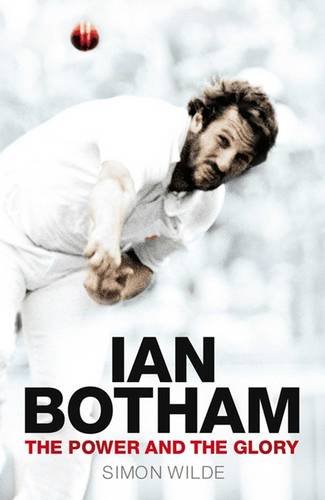 A gripping biography of the man who shook cricket to its foundations and became a British sporting great in the process, Ian Botham

Ian Botham: The Power and the Glory by Simon Wilde

Ian Botham arrived on the international scene just in time to ride sport's first big financial wave and exploit the Thatcherite mantra of go-out-and-get-what-you-want. He certainly needed the cash, having been regularly short since leaving state school in Yeovil at 15. In an era short on glamour and personalities, Botham brought an irresistible cocktail of talent, energy and swagger. With the stench of economic failure still in the air, he made the country feel good about itself again. He showed that Britain could still produce champions and that the working class still deserved to be valued. For this he won himself a fund of public goodwill, a fund he sometimes threatened to drain but uncannily managed to replenish.

He had an insatiable appetite, and an uncanny knack, for creating tales of heroism, but if he failed on that score there was always the chance of a scandal or two. He gave the media everything they needed for front pages and back, and some newspapers discovered that it didn't necessarily matter if the story was true or not, as long as he was in it.

Ian Botham tells the story a great piece of British sporting history, one of the greatest: of a man for whom the glamour and the grit came together. And it was the grit of the times in which Botham had grown up, and where he had come from.
'As a frequenter of press boxes for upwards of a decade, Simon Wilde will have crossed paths with Botham on more or less a daily basis for years, but The Sunday Times' cricket correspondent doesn't let his proximity to his subject inhabit him in this revealing biography... In fact, this proving book does quite the opposite as Wilde uses testimony from fellow members of cricket's journalistic fraternity - who know Botham the man as well as Botham the cricketer - to create a candid assessment of a character who is perhaps more complex than most give him credit for' Book of the Month, All Out Cricket, June issue 'Simon Wilde's biography chews over the evidence of a number of "Beefy" legends, including, the exaggerated account of a young Botham's bar brawl with the former Australian captain Ian Chappell in 1977. Wilde, cricket correspondent for the Sunday Times, has spoken to many of those close to Botham and those who played alongside him. His judgement is sound and his storytelling pleasingly laconic: it leaves much of the work to the voices of the witnesses - as it should be' Dan Jones, New Statesman 24/4 'With either bat or ball, [Botham] rescued seemingly hopeless causes three times against Australia in 1981... He did it, moreover, when his own career seemed close to ruin... Simon Wilde, in this perfectly paced and exhaustively researched biography, recalls the magic of that astonishing summer. But he doesn't neglect the darker side of Botham's career and character, revealing a more complex and nuanced personality than the gruff, self-confident exterior suggested ... As Wilde shrewdly observes, this working-class boy who went to a comprehensive and built his career on perspiration, became one of the last standard-bearers for the English public school amateur tradition, which regarded conspicuous effort as evidence of low breeding' Peter Wilby, Guardian 23/4 'A staggering story, extremely well told by author Simon Wilde, but it does not always make the cheeriest reading' James Lawton, Independent 30/4 'Wilde's exhaustively researched book is a thoroughly enjoyable, well-paced read. Truth really is stranger than fiction' Steve James, Daily Telegraph 3/5
Simon Wilde is a journalist and author. He has written for The Times and Sunday Times since 1998, and is currently the latter's cricket correspondent. Three of his books have been shortlisted for the William Hill Sports Book of the Year award: Ranji: A Genius Rich and Strange, Letting Rip: The Fast Bowling Threat from Lillee to Waqar and Shane Warne: Portrait of a Flawed Genius. He also wrote Ian Botham: The Power and the Glory, published by Simon & Schuster. He lives in Hampshire.
GOR003134849
9781847376480
1847376487
Ian Botham: The Power and the Glory by Simon Wilde
Simon Wilde
Used - Very Good
Hardback
Simon & Schuster Ltd
2011-04-14
384
N/A
Book picture is for illustrative purposes only, actual binding, cover or edition may vary.
This is a used book - there is no escaping the fact it has been read by someone else and it will show signs of wear and previous use. Overall we expect it to be in very good condition, but if you are not entirely satisfied please get in touch with us
Trustpilot