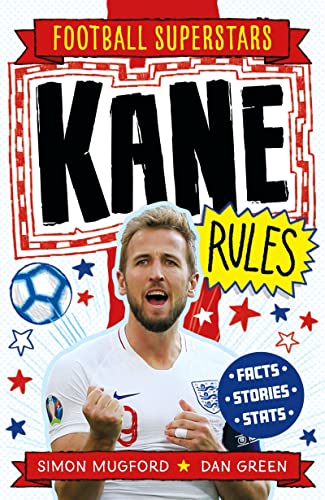 Everything the young fan needs to know about England and Tottenham Hotspur's star forward Harry Kane.

Filled with quizzes, stats and little known facts, plus illustrated and told with all the fun of a Tom Gates novel, the Football Superstars series is perfect for young readers five and up.

Is Harry Kane your ultimate football hero? He was the first player to score 100 goals for Spurs in the Premier League and is an awesome striker for England too, winning the Golden Boot at the 2018 FIFA World Cup.

But it hasn't always been easy for Kane. When he was just eight years old he was released by Arsenal, but Kane has never been one to give up. Discover how Kane signed for local rivals Spurs and then became their star striker and a living legend.

Football Superstars is a series aimed at building a love of reading from a young age, with fun cartoons, inspirational stories, a simple narrative style and a cast of characters chipping in with quotes, jokes and comments.

Despite being a fully grown man, Simon Mugford's favourite subjects include dinosaurs, robots, rockets, loud music and Star Wars. An Ipswich Town fan since they won the FA Cup in 1978 (it's true - look it up) he lives in Kent with his wife, daughter, and a cat with two names.

GOR010950164
9781783125364
1783125365
Kane Rules by Simon Mugford
Simon Mugford
Football Superstars
Used - Very Good
Paperback
Welbeck Publishing Group
2020-04-02
128
N/A
Book picture is for illustrative purposes only, actual binding, cover or edition may vary.
This is a used book - there is no escaping the fact it has been read by someone else and it will show signs of wear and previous use. Overall we expect it to be in very good condition, but if you are not entirely satisfied please get in touch with us
Trustpilot