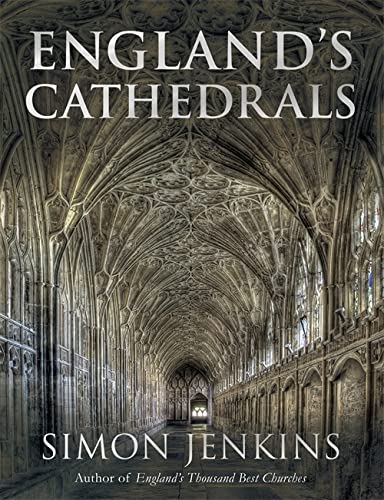 The author of the magisterial England's Thousand Best Churches turns his eye to England's cathedrals, with fascinating, personal - and often funny - insight into their history and their place in English life.

'Inspired . . . encourages us to take a fresh look at the familiar' - The Times

England's cathedrals are the nation's glory. They tower over its landscape, outranking palaces, castles and mansions. They attract roughly half the nation's population each year. For a millennium they have been objects of pilgrimage for those seeking faith, consolation and beauty. Still at the start of the twenty-first century, they remain unequalled in their size and splendour.

More than any other English institution, cathedrals reflect the vicissitudes of history and should be treasured as such. They are custodians of culture and of the rituals of civic life. They offer welfare and relieve suffering. They uplift spirits with their beauty. In a real sense they are still what they were when first built a millennium ago, a glimpse of the sublime.

Gloriously illustrated throughout, England's Cathedrals not only offers us a companion to England's Thousand Best Churches, it takes us on an enthralling tour of the nation and its history, through some of our most astonishing buildings.

Inspired . . . encourages us to take a fresh look at the familiar * The Times *
An essential supplement to his marvellously illuminating guidebook England's Thousand Best Churches * Evening Standard *
Simon Jenkins is a journalist and author. He writes for the Guardian as well as broadcasting for the BBC. He has edited The Times and the Evening Standard and chaired the National Trust.
GOR008099649
9781408706459
1408706458
England's Cathedrals by Simon Jenkins
Simon Jenkins
Used - Very Good
Hardback
Little, Brown Book Group
2016-10-06
384
N/A
Book picture is for illustrative purposes only, actual binding, cover or edition may vary.
This is a used book - there is no escaping the fact it has been read by someone else and it will show signs of wear and previous use. Overall we expect it to be in very good condition, but if you are not entirely satisfied please get in touch with us
Trustpilot