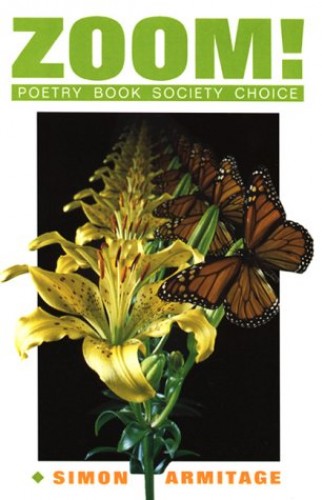 Zoom! is the book which launched Simon Armitage's meteoric rise to poetic stardom. It was shortlisted for the Whitbread Poetry Award in 1989.

Zoom! is the book which launched Simon Armitage's meteoric rise to poetic stardom. It was shortlisted for the Whitbread Poetry Award in 1989 and was a Poetry Book Society Choice. The e-book edition of Zoom! incorporates audio files for 18 of the poems using recordings Simon Armitage made for Peter Sansom in Huddersfield in 1989. So the voice you hear is that of Simon Armitage, then aged 26, when he was still working as a probation officer and had just published his first book of poems.
You couldn't mistake Simon Armitage for any other poet. He has found his voice early, and it really is his own voice - his language and rhythms drawn from the Pennine village where he lives: robust, no-nonsense and (above all) honest. -- Peter Sansom
Astonishingly good for such a young writer... poems with an energy which comes directly from life now and the living language. -- Carol Ann Duffy * Guardian *
Armitage creates a muscular but elegant language of his own out of slangy, youthful, up-to-the-minute jargon and the vernacular of his native northern England. He combines this with an easily worn erudition, plenty of nous and the benefit of unblinkered experience...to produce poems of moving originality. -- Peter Reading * Sunday Times *
Simon Armitage was born in 1963 in Huddersfield, England. After studying Geography at Portsmouth Polytechnic, he worked with young offenders before gaining a postgraduate qualification in social work at Manchester University. He worked as a probation officer in Oldham until 1994. His poetry books include Zoom! (Bloodaxe Books, 1989), Xanadu (Bloodaxe Books, 1992), and later collections published by Faber, including Kid (1992), and CloudCuckooLand (1997). He won an Eric Gregory Award in 1988. Zoom! was a Poetry Book Society Choice and was shortlisted for a Whitbread Poetry Award. Mister Heracles (2000), an adaptation of Euripides' Heracles, was commissioned by the West Yorkshire Playhouse. His first Selected Poems was published by Faber in 2001, followed by The Universal Home Doctor (2002). More recently he has published a number of verse adaptations of classic works, including Homer's Odyssey (2006), Sir Gawain and the Green Knight (2007), The Death of King Arthur (2011), and a dramatisation for BBC Radio 4, The Last Days of Troy (2015). His most collections of poetry from Faber are Tyrannosaurus versus the Corduroy Kid (2006), Seeing Stars (2010), Paper Aeroplanes: Poems 1989-2014 (2014) and The Unaccompanied (2017). Simon Armitage has worked extensively in film, radio and television, and has published fiction and non-fiction titles. He is Professor of Poetry at the University of Leeds and was elected to serve as Professor of Poetry at the University of Oxford for 2015-2019. He has also taught at the University of Leeds, the University of Iowa's Writers' Workshop and at Manchester Metropolitan University before his 2011 appointment as Professor of Poetry at the University of Sheffield. He was made a CBE for services to poetry in 2010. In 2012, as an artist in residence at London's Southbank Centre, he conceived and curated Poetry Parnassus, a gathering of world poets and poetry from every Olympic nation as part of Britain's Cultural Olympiad, a landmark event generally recognised as the biggest coming together of international poets in history, documented in the Bloodaxe anthology, The World Record, for which he wrote the introduction.
GOR011087062
9781852240783
1852240784
Zoom! by Simon Armitage
Simon Armitage
Used - Like New
Paperback
Bloodaxe Books Ltd
1989-01-01
80
N/A
Book picture is for illustrative purposes only, actual binding, cover or edition may vary.
The book has been read, but looks new. The book cover has no visible wear, and the dust jacket is included if applicable. No missing or damaged pages, no tears, possible very minimal creasing, no underlining or highlighting of text, and no writing in the margins
Trustpilot