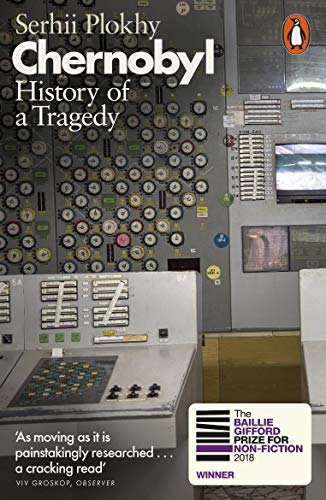 Chernobyl: History of a Tragedy by Serhii Plokhy

'As moving as it is painstakingly researched. . . a cracking read' Viv Groskop, Observer

'A riveting account of human error and state duplicity. . . rightly being hailed as a classic' Hannah Betts, Daily Telegraph

On 26 April 1986 at 1.23am a reactor at the Chernobyl Nuclear Power Plant in Soviet Ukraine exploded. While the authorities scrambled to understand what was occurring, workers, engineers, firefighters and those living in the area were abandoned to their fate. The blast put the world on the brink of nuclear annihilation, contaminating over half of Europe with radioactive fallout.

In Chernobyl, award-winning historian Serhii Plokhy draws on recently opened archives to recreate these events in all their drama. A moment by moment account of the heroes, perpetrators and victims of a tragedy, Chernobyl is the first full account of a gripping, unforgettable Cold War story.

'A compelling history of the 1986 disaster and its aftermath . . . plunges the reader into the sweaty, nervous tension of the Chernobyl control room on that fateful night when human frailty and design flaws combined to such devastating effect' Daniel Beer, Guardian

'Here at last is the monumental history the disaster deserves' Julie McDowall, The Times

An insightful and important book, that often reads like a good thriller, and that exposes the danger of mixing powerful technology with irresponsible politics -- Yuval Noah Harari, author of Sapiens
As moving as it is painstakingly researched, this book is a tour de force and a cracking read. . . Without losing any detail or nuance, Plokhy has a knack for making complicated things simple while still profound -- Viv Groskop * Observer *
A work of deep scholarship and powerful stroytelling. Plokhy is the master of the telling detail -- Victor Sebestyen * Sunday Times *
A compelling history of the 1986 disaster and its aftermath. . . Plokhy's well-paced narrative plunges the reader into the sweaty, nervous tension of the Chernobyl control room -- Daniel Beer * Guardian *
The first comprehensive history of the Chernobyl disaster. . . here at last is the monumental history the disaster deserves -- Julie McDowall * The Times *
Plokhy, a Harvard professor of Ukrainian background, is ideally placed to tell the harrowing story of Chernobyl. . . he has an immense knowledge of Russian and Ukrainian history and maintains the highest standards of scholarship -- Tony Barber * Financial Times *
A meticulous account of the disaster - and how the Soviet authorities tried to cover it up. . . A worthy winner of this year's Baillie Gifford prize for nonfiction -- Robbie Millen * The Times Books of the Year *
A riveting account of human error and state duplicity. . . rightly being hailed as a classic -- Hannah Betts * Daily Telegraph *
A masterful retelling. . . Mr Plokhy's book will endure as a definitive history * Economist *
Serhii Plokhy is Professor of History at Harvard University and a leading authority on Eastern Europe whose previous books include Lost Kingdom, The Gates of Europe and The Last Empire. At the time of the Chernobyl explosion he lived behind the Iron Curtain less than 500 kilometres downstream of the damaged reactor.
GOR009661572
9780141988351
0141988355
Chernobyl: History of a Tragedy by Serhii Plokhy
Serhii Plokhy
Used - Very Good
Paperback
Penguin Books Ltd
2019-01-31
432
N/A
Book picture is for illustrative purposes only, actual binding, cover or edition may vary.
This is a used book - there is no escaping the fact it has been read by someone else and it will show signs of wear and previous use. Overall we expect it to be in very good condition, but if you are not entirely satisfied please get in touch with us
Trustpilot