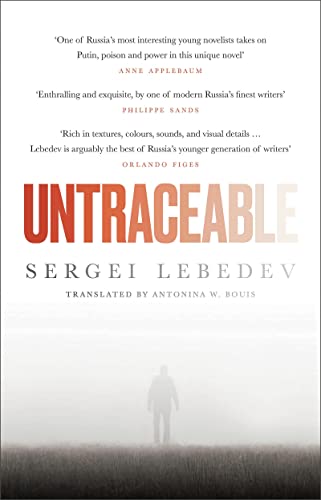 A Russian novel about poisons of all kinds - physical, moral, political - all rooted in the recent history of Russia's state assassinations and Putin's continuation of the most degraded traditions of his country's history.

'A thriller dipped in poison ... Lebedev shares some of le Carre's fascination with secret worlds and the nature of evil' New York Times

An extraordinary and angry Russian novel about poisons of all kinds: physical, moral and political.

Professor Kalitin is a ruthless, narcissistic chemist who has developed an untraceable, extremely lethal poison called Neophyte while working in a secret city on an island in the Russian far east. When the Soviet Union collapses, he defects and is given a new identity in Germany.

After an unrelated Russian is murdered with Kalitin's poison, his cover is blown and he's drawn into the German investigation of the death. Two special forces killers with a lot of Chechen blood on their hands are sent to silence him - using his own undetectable poison. Their journey to their target is full of blunders, mishaps, holdups and accidents.

'One of Russia's most interesting young novelists takes on Putin, poison and power in this unique novel; Lebedev provides a fascinating window on modern Russia' Anne Applebaum

'Turn off your television sets and get reading. Sergei Lebedev writes not of the past, but of today' Svetlana Alexievich

'Lebedev's books dealt with history - it lay like a shadow over everything he wrote - and the fact that its presence was so powerful suggested that the conflicts and tensions inherent in it were still unresolved, still had a bearing on Russian society in obscure yet palpable ways' Karl Ove Knausgaard

'Not since Alexander Solzhenitsyn has Russia had a writer as obsessed as Sergei Lebedev with that country's history or the traces it has left on the collective consciousness. Rich in textures, colors, sounds, and visual details, wonderfully rendered into English by Antonina W. Bouis ... Lebedev is arguably the best of Russia's younger generation of writers' -- Orlando Figes, New York Review of Books
'Enthralling and exquisite, by one of modern Russia's finest writers' -- Philippe Sands, author of East West Street
'One of Russia's most interesting young novelists takes on Putin, poison and power in this unique novel; Lebedev provides a fascinating window on modern Russia' -- Anne Applebaum
'A spellbinding insight into a secret world that we forget at our peril, a world of assassins, spies, patriots and poison masters whose shockingly evil decisions are made in their unwavering belief of serving a greater good. A thrilling, haunting, essential read' -- Roy MacLean, author of Pravda Ha Ha: Truth, Lies and the End of Europe
'Astonishing ... Ingeniously structured around the progressive uncovering of memories of a difficult personal and national past [...] with a visceral, at times almost unbearable, force' * Times Literary Supplement *
'A Dantean descent ... As cold and stark as a glacial crevasse, but as beautiful as one, too, with a clear poetic sensibility built to stand against the forces of erasure' * Wall Street Journal *
'Sergei Lebedev is a marvelous writer with two rare gifts: a nobility of style and the most precise inner vision, which allows him to see and plumb the entire depth of the anthropological catastrophe that occurred in twentieth-century Russia. Lebedev has perceived what was invisible to most Soviet and post-Soviet writers' -- Vladimir Sorkin, author of The Blizzard, Day of the Oprichnik and Ice Trilogy
'I almost felt as though I should be swearing an official secrets act in order to read Untraceable. [Lebedev's] words echoed through me ... The translation by Antonina W. Bouis is fabulous ... A beautiful, disturbing and penetrating read' * LoveReading *
'I was captured by the velvet lyricism of his prose and his le Carre-ish plot' * Guardian *
'Beautifully written, this political spy thriller from Russia is an exciting, penetrating, absolute whammy of a read' * LoveReading *
'Lebedev has written a novel with firm nods to Skripal and Novichok, but also widens out to poisons both moral and political' * Living Magazine *
'An intense and intelligent novel that maps the political life of modern Russia through its history and relationship with the wider world ... This is a novel of ethics and pragmatism, of obsession and revenge, of entrenched divisions and how power resides in the wrong hands' * Crime Time *
Sergei Lebedev was born in Moscow in 1981 and worked for seven years on geological expeditions in northern Russia and Central Asia. Lebedev is a poet, essayist and journalist. His novels have been translated into many languages and received great acclaim in the English-speaking world. The New York Review of Books has hailed Lebedev as 'the best of Russia's younger generation of writers'. Antonina W. Bouis is one of the leading translators of Russian literature working today. She has translated over 80 works from authors such as Evgeny Yevtushenko, Mikhail Bulgakov, Andrei Sakharov, Sergei Dovlatov and Arkady and Boris Strugatsky. Bouis, previously executive director of the Soros Foundation in the former USSR, lives in New York City.
GOR011236470
9781800246591
1800246595
Untraceable by Sergei Lebedev
Sergei Lebedev
Used - Very Good
Hardback
Head of Zeus
2021-03-04
256
N/A
Book picture is for illustrative purposes only, actual binding, cover or edition may vary.
This is a used book - there is no escaping the fact it has been read by someone else and it will show signs of wear and previous use. Overall we expect it to be in very good condition, but if you are not entirely satisfied please get in touch with us
Trustpilot