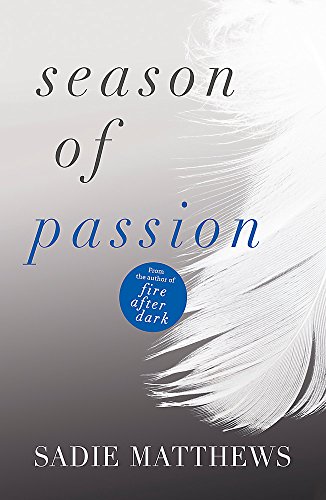 Season of Passion by Sadie Matthews

The second book in a sensual and provocative romance series, by the bestselling author of the After Dark trilogy.

A provocative, romantic story of desire, submission and love: the second book in the Seasons series by the author of the After Dark trilogy.

Flora Hammond is trying to make her dream of being an actress come true by studying her craft in Paris. But she cannot escape her privileged background and the paranoia of her wealthy father who is obsessive about his daughters' safety. The situation is not helped by the fact that Flora's older sister, Freya, has just run off with her bodyguard.
Drawn into the family scandal, Flora tries to make peace between the warring factions. In the meantime, her path crosses with that of a mysterious businessman, Andrei Dubrovski, and there is an instant attraction between them. Even though Flora is warned off getting involved with him, she doesn't think she can resist.
Is Freya right when she claims that their father's girlfriend Estella is engaged in a campaign against the sisters? And where has Freya disappeared to? Does Estella have the power to split the family apart, even to the point of breaking the bond between Flora and her twin sister, Summer?
As Flora's obsession with Andrei grows, it's clear that where passion is concerned, the heart has its reasons . . .

Sadie has a lovely, easy style of writing that makes the story flow so easily as it process along the ups and downs of the couples new relationship, that you really feel part of their world. Without the hint of repetition and wonderfully left open for a sequel, Fire After Dark is an intense and passionate book, that is perfect for those who tentatively want dip their toes into the exciting world of BDSM. - www.handwrittengirl.com on FIRE AFTER DARKThis book is written at such an easy pace which allowed me to finish the whole book in one evening! I would definitely describe this book as sexy, sassy and exciting and I did find I was hooked - www.reabookreview.blogspot.co.uk on FIRE AFTER DARK

Sadie Matthews is the author of provocative, romantic novels that explore an intense and intimate side of life and relationships. The After Dark series was her first trilogy, and entranced readers with its sensual, engrossing story and unforgettable characters. The Seasons trilogy is her latest series, telling the story of the Hammond sisters.
Sadie Matthews is married and lives in England. Find Sadie on Twitter at www.twitter.com/sadie_matthews.

GOR010190283
9781444781168
1444781162
Season of Passion: Seasons series Book 2 by Sadie Matthews
Sadie Matthews
Seasons trilogy
Used - Like New
Paperback
Hodder & Stoughton
2014-09-11
320
N/A
Book picture is for illustrative purposes only, actual binding, cover or edition may vary.
The book has been read, but looks new. The book cover has no visible wear, and the dust jacket is included if applicable. No missing or damaged pages, no tears, possible very minimal creasing, no underlining or highlighting of text, and no writing in the margins
Trustpilot