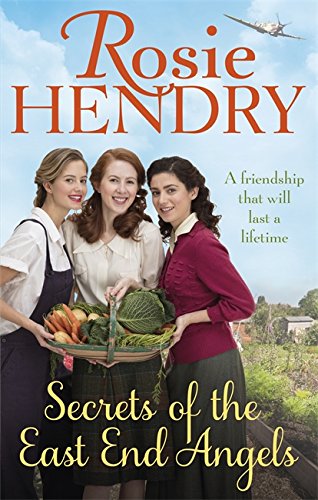 Secrets of the East End Angels by Rosie Hendry

Theirs was a friendship that would last a lifetime . . . The second novel in the East End Angel series, following Bella, Winnie and Frankie and their lives as members of Station Seventy-Five's ambulance crew.

Secrets of the East End Angels by Rosie Hendry

Theirs was a friendship that would last a lifetime . . . The second novel in the East End Angel series, following Bella, Winnie and Frankie and their lives as members of Station Seventy-Five's ambulance crew.

London, 1941. The East End Angels - Frankie, Bella and Winnie - are settled into life as ambulance crew members at LAAS Station Seventy-Five. The threat of air raids and other atrocities are a constant worry, but life continues regardless and the weight of responsibility weighs heavy on each of them.

Frankie's grandfather is unwell and she promised him she would always look after Ivy, her step-grandmother, but things between the two women are becoming increasingly strained. And then Frankie discovers something that turns everything she thought she knew about herself on its head.

Winnie's natural leadership puts her at the forefront at the station and she's soon making the difficult decisions on call-outs. As she is exposed to a higher level of war and destruction, she begins to wonder how much more London can take - and how much more can she take?

Bella is beginning to drive the ambulances, she is growing closer to James and her love for writing is opening up new doors for her. Then she receives devastating news about someone close to her and things begin to unravel.

Life and war may keep testing the angels but love will always find a way to shine and the strength of their friendship will see them through the darkest of times.

Rosie Hendry lives by the sea in Norfolk with her husband and two children. She is the author of the East End Angels series, which is an uplifting and heart-warming saga series following the lives and loves of Winnie, Frankie and Bella, who all work for the London Auxiliary Ambulance Service (LAAS) during the Blitz. Listening to her father's tales of life during the Second World War sparked Rosie's interest in this period and she loves researching further, searching out gems of real life events which inspire her writing.

GOR009061511
9780751566840
0751566845
Secrets of the East End Angels by Rosie Hendry
Rosie Hendry
East End Angels
Used - Very Good
Paperback
Little, Brown Book Group
2018-04-19
416
N/A
Book picture is for illustrative purposes only, actual binding, cover or edition may vary.
This is a used book - there is no escaping the fact it has been read by someone else and it will show signs of wear and previous use. Overall we expect it to be in very good condition, but if you are not entirely satisfied please get in touch with us
Trustpilot