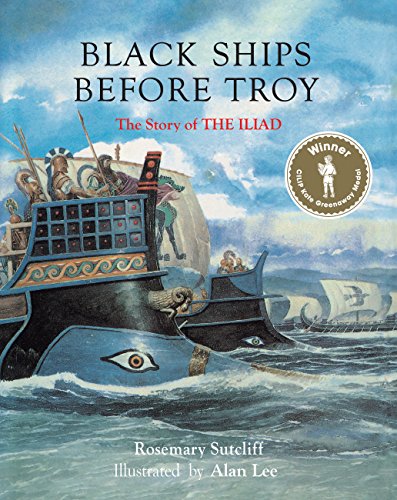 Frances Lincoln is proud to reintroduce the Greenaway award-winning Black Ships Before Troy.

Here is Homer's epic poem The Iliad, brought to life by Rosemary Sutcliff with all the skill of a master storyteller. Alan Lee's dramatic cover image hauntingly recreates the age of heroes in this introduction to the Greek classics--a book that should become part of every childhood.
'A magnificent achievement...if ever a book was unputdownable, whether by an adult or child, it is this one...it bears the unmistakeable mark of a masterpiece of children's literature.' * The Times Educational Supplement *
Rosemary Sutcliff's superb retelling of the Iliad. ...Now reissued, it captures the romance, pathos and savagery of Homer's Bronze Age epic. * The Wall Street Journal *
'A welcome reissue of the acclaimed retelling by Rosemary Sutcliff, one of the most distinguished children's authors of the twentieth century. It is the perfect introduction to the classical world of the Iliad. The fabulous illustrations by Alan Lee won him the Kate Greenaway Medal, and bring this title to life.' * The Guardian Best Books Guide 2017 *
'This stunning children's version of The Iliad by the award-winning Rosemary Sutcliff and Alan Lee was first published in 1993 and is being republished now. Its rich illustration will look familiar to The Lord of the Rings fans, as Lee was the conceptual artist for the Peter Jackson films. Featuring the stories of heroes Ajax, Achilles and Penthesilea (the Amazon Queen), this is high adventure at its best.' * Book Trust *

ROSEMARY SUTCLIFF was born in Surrey, the daughter of a naval officer. At the age of two she contracted the progressively wasting Still's disease, and hence spent most of her life in a wheelchair. Her first children's book was published in 1950, and from then on she devoted her time and talents to the writing of children's historical novels, which have placed her name high in the field of contemporary children's literature. Rosemary received an OBE in the 1975 Birthday Honours List. Rosemary Sutcliff's novels about Roman Britain have won much critical acclaim. The best-known of these is her The Eagle of the Ninth trilogy, of which the second book in the trilogy, The Lantern Bearers, was awarded the 1959 Carnegie Medal. Rosemary died in 1992 at the age of 72.

ALAN LEE is an English book illustrator and movie conceptual designer. He won the Kate Greenaway Medal for his illustrations to Rosemary Sutcliff's Black Ships Before Troy, which was followed by The Wanderings of Odysseus (both Frances Lincoln). In 1998 he won the Best Artist Award at the World Fantasy Awards. He illustrated the Centenary editions of J.R.R. Tolkien's The Hobbit and The Lord of the Rings and, more recently, The Children of Hurin (HarperCollins). He went on to transform his vision of Middle Earth from page to celluloid in Peter Jackson's film trilogy The Lord of the Rings, winning an Oscar in 2004 as part of the Art Direction team on The Return of the King. He is now designing the film of The Hobbit. Alan lives in South Devon.

GOR009442697
9781847809957
1847809952
Black Ships Before Troy by Rosemary Sutcliff
Rosemary Sutcliff
Used - Very Good
Hardback
Frances Lincoln Publishers Ltd
20170601
128
N/A
Book picture is for illustrative purposes only, actual binding, cover or edition may vary.
This is a used book - there is no escaping the fact it has been read by someone else and it will show signs of wear and previous use. Overall we expect it to be in very good condition, but if you are not entirely satisfied please get in touch with us
Trustpilot