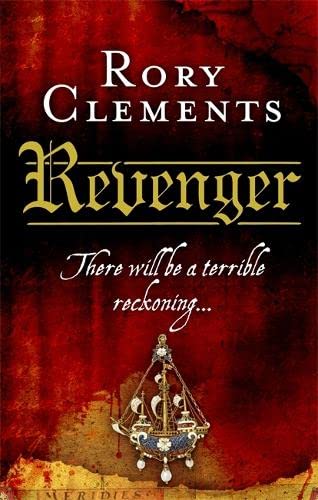 Revenger (John Shakespeare 2) For fans of CJ Sansom and SJ Parris, REVENGER is the fourth in chronological order of Rory Clements' acclaimed and bestselling John Shakespeare series of Tudor spy thrillers. Clements, winner of the Ellis Peters Historical Fiction Award, 'does for Elizabeth's reign what CJ Sansom does for Henry VIII's' Sunday Times

Revenger (John Shakespeare 2) For fans of CJ Sansom and SJ Parris, REVENGER is the fourth in chronological order of Rory Clements' acclaimed and bestselling John Shakespeare series of Tudor spy thrillers. Clements, winner of the Ellis Peters Historical Fiction Award, 'does for Elizabeth's reign what CJ Sansom does for Henry VIII's' Sunday Times

1592. England and Spain are at war, yet there is peril at home, too. The death of her trusted spymaster Sir Francis Walsingham has left Queen Elizabeth vulnerable. Conspiracies multiply.

The quiet life of John Shakespeare is shattered by a summons from Robert Cecil, the cold but deadly young statesman who dominated the last years of the Queen's long reign, insisting Shakespeare re-enter government service. His mission: to find vital papers, now in the possession of the Earl of Essex.

Essex is the brightest star in the firmament, a man of ambition. He woos the Queen, thirty-three years his senior, as if she were a girl his age. She is flattered by him - despite her loathing for his mother, the beautiful, dangerous Lettice Knollys who presides over her own glittering court - a dazzling array of the mad, bad, dangerous and disaffected.

When John Shakespeare infiltrates this dissolute world he discovers not only that the Queen herself is in danger - but that he and his family is also a target. With only his loyal footsoldier Boltfoot Cooper at his side, Shakespeare must face implacable forces who believe themselves above the law: men and women who kill without compunction. And in a world of shifting allegiances, just how far he can trust Robert Cecil, his devious new master?

Enjoyable, bloody and brutish. * Guardian *
A historical thriller to send a shiver down your spine. * Daily Mail *
Clements can be seen as doing for Elizabeth's reign what CJ Sansom does for Henry VIII's. * Sunday Times *
John Shakespeare is one of the great historical sleuths. -- Barry Forshaw
A colourful history lesson . . . exciting narrative twists. * Sunday Telegraph *
Rory Clements is the award-winning author of the John Shakespeare series of Tudor spy thrillers. His six acclaimed novels, Martyr, Revenger, Prince, Traitor, The Heretics and The Queen's Man, follow Elizabeth's Intelligencer, John Shakespeare, brother to the playwright William, through the dark underworld of Tudor England as he unmasks the traitors and conspirators who plot against the Queen. Rory Clements won the Crime Writers' Association Ellis Peters Historical Fiction Award in 2010 for Revenger, and has been shortlisted for CWA Awards for Martyr, Prince and The Heretics. A TV series is currently in development. Find out more at www.roryclements.co.uk
GOR001854776
9781848540835
1848540833
Revenger: John Shakespeare 2 by Rory Clements
Rory Clements
John Shakespeare
Used - Very Good
Hardback
Hodder & Stoughton
20100429
448
Winner of CWA Ellis Peters Historical Award 2010 (UK)
Book picture is for illustrative purposes only, actual binding, cover or edition may vary.
This is a used book - there is no escaping the fact it has been read by someone else and it will show signs of wear and previous use. Overall we expect it to be in very good condition, but if you are not entirely satisfied please get in touch with us
Trustpilot