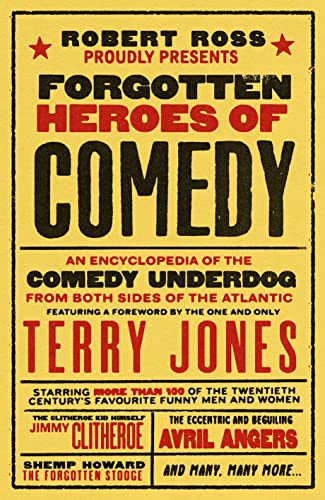 Featuring a foreword by the late Terry Jones, this is the definitive survey of the twentieth century's overlooked comic greats

Forgotten Heroes of Comedy: An Encyclopedia of the Comedy Underdog by Robert Ross

In this long overdue and affectionate salute, celebrated comedy historian Robert Ross pays tribute to some of the finest, funniest and most fascinating names in comedy from both sides of the Atlantic.

Delving into the careers of the beguiling Avril Angers, the Clitheroe Kid himself, the forgotten Stooge Shemp Howard, Hollywood golden girl Thelma Todd, Italian film-maker Mario Zampi and many more between, Ross honours these legends of humour who, for a variety of reasons, didn't quite reach the heady heights of stardom - or, once they did, they couldn't cope with the pressures.

Whether it is a favourite from the distant smoke and ale-stained world of the Music Hall like the great George Robey, or the downbeat poetry of Hovis Presley, who dropped disenchanted bombs on the late 1990s, the Forgotten Heroes of Comedy will finally elevate them to the Hall of Fame where they belong. Forgotten, no longer.

Robert Ross is the leading authority on the history of British comedy. His sixteen books include The Monty Python Encyclopedia, The Carry On Story, Sid James - Cockney Rebel, The Complete Terry-Thomas and official BBC celebrations of Fawlty Towers, Last of the Summer Wine and Steptoe and Son. His latest book is a critically-acclaimed biography of Marty Feldman.

He is a frequent guest on radio and his many television credits include interviews for What's A Carry On?, Top Ten: Comedy Records, Will the Real Basil Fawlty Please Stand Up?, What the Pythons Did Next, Richard & Judy and BBC News. He lives in Buckinghamshire. www.robertross.co.uk

NPB9781783529186
9781783529186
1783529180
Forgotten Heroes of Comedy: An Encyclopedia of the Comedy Underdog by Robert Ross
Robert Ross
New
Hardback
Unbound
2021-10-28
640
N/A
Book picture is for illustrative purposes only, actual binding, cover or edition may vary.
This is a new book - be the first to read this copy. With untouched pages and a perfect binding, your brand new copy is ready to be opened for the first time
Trustpilot