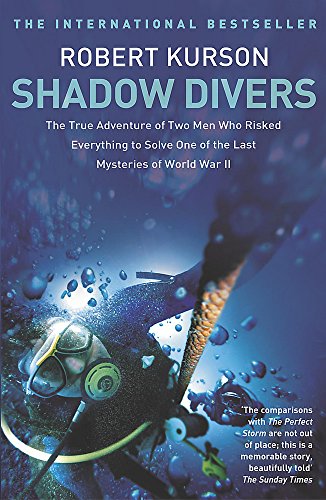 A gripping true story of one of the last mysteries of World War II: 'comparisons with THE PERFECT STORM are not out of place' The Sunday Times

February 1945 - The war is almost over and Britain and America rule the waves. To enlist for a German U-boat is suicidal. But sixty young Nazi soldiers choose to enter the cramped underwater conditions of the U-869 for the most difficult mission of all - to reach and then bomb the coast of America. Several weeks later the boat barely has enough fuel to make it home and radio links with Germany are broken. The commander, Neuerberg, must make a tough decision: to carry on to America and risk death in the pursuit of glory, or to admit defeat and return home. Driven by pride, patriotism and determination, he decides to risk it.

June 1991 - A group of deep-sea divers hear about the wreck of a U-boat 260 feet beneath the sea. There are virtually no records of the Nazi submarine, and an on-location investigation is extremely dangerous. But twelve divers decide to take the risk. Over the next six years they eventually piece together an incredible story. In the process three of the divers die, marriages collapse, and history is made. Deep water wreck diving is the world's deadliest sport, and John Chatterton and Richie Kohler pushed its limits.

This is a beautifully written, dramatic book about one of the greatest of human traits - the resolve people find in moments of deepest peril.

His research is meticulous, his characters are skilfully drawn and the narrative is so well paced and constructed that it develops a hypnotic, almost suffocating tension. But far more than adventure, this is also a haunting, painful story of obsession. The comparisons with THE PERFECT STORM are not out of place; this is a memorable story, beautifully told. * The Sunday Times *
Undersea thrills, a gripping mystery, incredible discoveries...written with great you-are-there intensity and dynamic verve. A pulse-quickening real-life thriller. * New York Times *
[A] pulse-quickening account of the attempt to explore and identify the mystery sub . . . [a] fantastic yarn that happens to be true. * Newsweek *
An irresistible sea yarn...Sometimes writers, like divers, stumble on treasure. * Time *
Describes all the anguish, exhilaration and danger if deep-sea wreck diving in vivid detail...one of the best pieces of dive-related non-fiction I have read. * Sport Diver *
Superlative .... If the publishers are dreaming of another PERFECT STORM, they may get their wish. * Publishers Weekly *
A tremendously suspenseful story of discovery that comes as close as any book could to providing the reader with approximate sensations of deep sea diving and of life on a submarine at war, and that leaves us with a hell of an impression of the grit, guts, and compassion of a U-boat crew and the two American divers who risked everything to solve the mystery of their last mission. * John McCain, author of FAITH OF MY FATHERS *
Robert Kurson is a freelance journalist who writes for Esquire, Chicago and the Sunday Times. He is writing this book with cooperation from Chatterton and Kohler, and from the sole survivor of the U-boat.
GOR001448709
9780340824559
0340824557
Shadow Divers by Robert Kurson
Robert Kurson
Used - Very Good
Paperback
Hodder & Stoughton
2005-08-15
400
N/A
Book picture is for illustrative purposes only, actual binding, cover or edition may vary.
This is a used book - there is no escaping the fact it has been read by someone else and it will show signs of wear and previous use. Overall we expect it to be in very good condition, but if you are not entirely satisfied please get in touch with us
Trustpilot