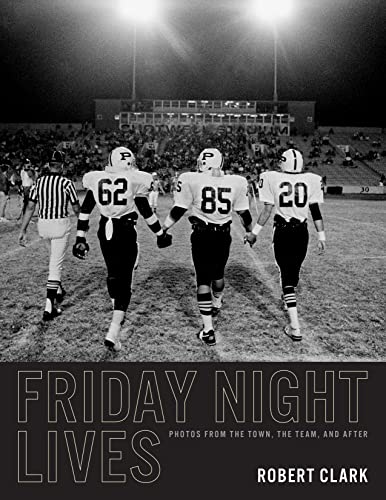 Friday Night Lives: Photos from the Town, the Team, and After by Robert Clark

In 1988, when Robert Clark was in his early twenties, he traveled to Odessa, Texas, to create a visual element for a book about a high school football team. That book was Buzz Bissinger's Friday Night Lights-the chronicle of a season with the Permian Panthers, one of the state's winningest teams of all time.

About twenty photos appeared in Bissinger's book, but Clark shot 137 rolls of film during his time with the Panthers. Friday Night Lives collects dozens of the never-before-seen images, taking us back to the team, the city, and that dramatic season. The archival photos, published here on the thirtieth anniversary of the publication of Bissinger's bestseller, capture intimate moments among the players and their families and classmates, as well as the wider world of Odessa.

Now the players have grown up. Friday Night Lives also includes Clark's portraits of key Panthers figures at a later age, documenting complex lives of beauty and struggle. Boobie Miles, the star fullback sidelined by injury, is here, along with Coach Gaines and others. In his heartfelt foreword, best-selling author Hanif Abdurraqib describes how Clark's photos rehumanize the players, reminding us of the truth of their young lives before their stories became nationally known in print, film, and television.

[An] outstanding portfolio...a book that belongs in every football fan's collection. * Kirkus, Starred Review *
Riveting...Thirty years after Buzz Bissinger's bestseller chronicled the Permian Panthers' 1988 season, these black and white photos are as compelling as ever...the grainy photographs have a grittiness suited to the hardscrabble West Texas landscape-you can practically taste the dust in the air. Clark's images of lonely highways and abandoned downtown storefronts have a grand, cinematic feel, while his portraits of players lifting weights, brushing their hair, or getting dressed for a game are almost unbearably intimate. * Texas Monthly *
[An] impressive illustrated volume...This is a fitting coda for fans of the book and show, and anyone with an interest in the rural America of a bygone era will want to take a look. * Publishers Weekly *
[Clark's] images are poignant, just like Bissinger's book about the Permian Panthers' quest to win the state championship before ultimately failing...The photographs are a visceral reminder of the emotions the young men went through before many considered them just football-playing characters on a screen...Friday Night Lives shows the real players and place that have largely become fictionalized to audiences across the country. * Texas Highways *
Through Clark's time capsule, viewers can hear the cheers of the crowd, the sounds of the locker room, the music played by the pep band, and feel the hot West Texas sun beating down on the football players during drills. * Smithsonian Magazine, The Ten Best Photography Books of 2020 *
The photos [in Friday Night Lives] further illuminate the town of Odessa and bring to life the real Boobie Miles and Coach Gaines, documenting the disparate emotions that marked the dramatic season. * Inside Hook, The 20 Best Coffee Table Books of 2020 *
Powerful...An impactful collection on the enduring popularity of Friday Night Lights, that will appeal to fans of the book, movie, or TV series. * Library Journal *
The notion of time passing runs through the pages of [Friday Night Lives]...The book from UT Press is part-time capsule, showing the Panthers in their glory days. But Clark also captures how the years have had its way with the once-young Odessa heroes, having returned to West Texas to photograph the men in their current lives. * Alcalde *
Robert Clark is a longtime contributor to National Geographic and other magazines. He shot the photos for the original edition of Friday Night Lights and has published the photobooks Evolution: A Visual Record, First Down Houston: A Year with the Houston Texans, Feathers: Displays of Brilliant Plumage, and Image America, the first photobook shot solely with a cellphone camera. A visiting writer in the MFA program at Butler University, Hanif Abdurraqib is an acclaimed poet and cultural critic whose work has appeared in the New York Times, MTV News, and other outlets. A nominee for the Pushcart Prize, he is the author of the highly praised poetry collection The Crown Ain't Worth Much and the essay collection They Can't Kill Us Until They Kill Us, which was included in the Chicago Tribune's 25 Must-Read Books list for fall 2017 and received recognition from reviewers coast-to-coast, including a starred review in Publishers Weekly. He is currently at work on They Don't Dance No Mo', a history of black performance in the United States.
NPB9781477321195
9781477321195
1477321195
Friday Night Lives: Photos from the Town, the Team, and After by Robert Clark
Robert Clark
New
Hardback
University of Texas Press
20201103
192
N/A
Book picture is for illustrative purposes only, actual binding, cover or edition may vary.
This is a new book - be the first to read this copy. With untouched pages and a perfect binding, your brand new copy is ready to be opened for the first time
Trustpilot