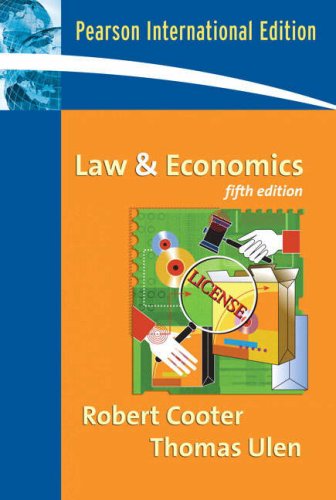 Law and Economics by Robert B. Cooter, Jr.

Law and Economics: International Edition by Robert B. Cooter, Jr.

Law and economics has become a central course in U.S. legal education and for students majoring in topics like economics, political science, and philosophy. With the Fifth Edition of their best-selling text, Cooter and Ulen provide a clear introduction to economic analysis and its application to legal rules and institutions that is accessible to any student who has taken principles of microeconomics.

The book's structure is flexible, beginning with an introductory overview of economic tools followed by paired chapters in five core areas of law: property, contracts, torts, legal process, and crime. Students leave the course understanding how microeconomic theory can be used to critically evaluate law and public policy.

Robert Cooter, a pioneer in the field of law and economics, began teaching in the Department of Economics at UC Berkeley in 1975 and joined the Boalt faculty in 1980. He has been a visiting member of the Institute for Advanced Study at Princeton and a recipient of various awards and fellowships, including Guggenheim, the Jack N. Pritzker Visiting Research Professorship at Northwestern Law School, and, most recently, the Max Planck Research Prize. He was an Olin visiting professor at the University of Virginia Law School and lectured at the University of Cologne in 1989. He is coeditor of the International Review of Law and Economics. He is one of the founders of the American Law and Economics Association and served from 1994 to 1995 as its president. In 1999 he was elected to the American Academy of Arts and Sciences.

Professor Ulen received a bachelor's degree from Dartmouth College, a master's from St. Catherine's College, Oxford, and a Ph.D. in Economics from Stanford University. He holds a Swanlund Chair, one of the highest endowed titles on the Urbana-Champaign campus, and is Director of the College's Program in Law and Economics. In addition, he is a research affiliate of the Environmental Council, a member of the Campus Honors faculty, and holds positions in the Department of Economics and the Institute for Government and Public Affairs. Recently, Professor Ulen served as a Visiting Professor at the University of Bielefeld, and as the Foreign Chair in International and Comparative Law at the University of Ghent, Belgium. He has previously been a Visiting Professor in Belgium, Germany, Slovenia, and a Ford Foundation Professor in Shanghai, China. Professor Ulen was a member of the founding Board of Directors of the American Law and Economics Association and has served as a member of the editorial board of several professional journals. He is also a co-organizer, with Professor Tom Ginsburg and Professor Richard McAdams, of the Midwest Law and Economics Association Annual Meeting at the College of Law.