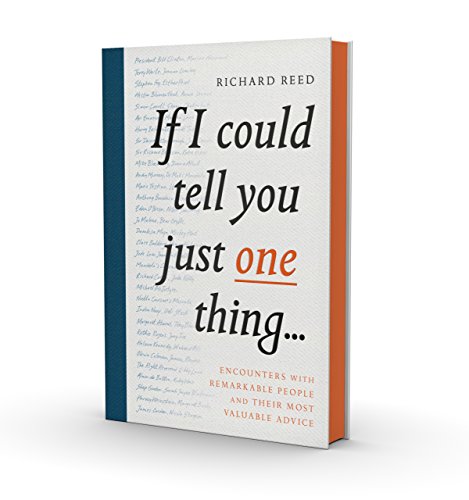 If I Could Tell You Just One Thing... by Richard Reed

A collection of the very best advice from some of the world's most successful and remarkable people. Gathered by the co-founder of Innocent Drinks.

If I Could Tell You Just One Thing...: Encounters with Remarkable People and Their Most Valuable Advice by Richard Reed

Adventures in advice with some of the world's most remarkable people. President Bill Clinton, Clare Balding, Stephen Fry, Dame Judi Dench, James Corden, Margaret Atwood, Sir David Attenborough, Annie Lennox, Andy Murray, Joanna Lumley, Anthony Bourdain, Marina Abramovic, Sir Richard Branson, Sandi Toksvig, Jude Law, Nicola Sturgeon, Harry Belafonte, Olivia Colman, Simon Cowell, Martha Lane-Fox, Mario Testino, Esther Perel, Bear Grylls, Diana Athill, Mike Bloomberg, Ruby Wax, Alain de Botton, Jo Malone, Heston Blumenthal, Ruthie Rogers, Nitin Sawhney, Katie Piper, Richard Curtis, Shami Chakrabarti, and Michael McIntyre are just some of the many inspiring people who appear in Richard Reed's fascinating book. In each case Richard asked them to share with him some of their hard-earned wisdom and insights into life and how to make the most of it. If I Could Tell You Just One Thing... is not only packed with great advice but is also an enormously entertaining, brilliantly written and stunningly designed book. Each of the encounters is complemented by a pen and ink portrait by the award-winning British artist, Samuel Kerr. The resulting book is a treasure trove for readers of all ages and interests and a perfect gift book for just about anyone.
Scanning through the delightfully illustrated pages, I found so many wonderful pearls of wisdom from remarkable game-changers, from Stephen Fry to Andy Murray, Sir David Attenborough to Martha Lane Fox . . . If you're looking for inspiration or useful life lessons, I recommend you pick up a copy -- RICHARD BRANSON
Funny, entertaining and inspiring, Reed's book will surely motivate anyone who picks it up . . . Invaluable insights into life from an amazing collection of people . . . Remarkable * * Sunday Post * *
Entertaining collection of pearls of wisdom . . . A fascinating new prism for understanding the powerful and the prominent * * Times Literary Supplement * *
Ever wondered how the world's most successful people ended up doing so well in their lives? . . . If I Could Tell You Just One Thing contains a host of tips to help us lead more rewarding lives * * Daily Mirror * *
Richard Reed studied geography at St. John's College, Cambridge before starting a career in advertising. A few years later he and two friends left their jobs to found Innocent Drinks. Starting from a market stall, today Innocent produces more than a million smoothies a day and sells them in 17 countries across Europe. Reed is the founder of Art Everywhere and co-founder of the Innocent Foundation and JamJar Investments. He also presented the BBC Three series Be Your Own Boss. This is his first book.
GOR007821127
9781782119227
1782119221
If I Could Tell You Just One Thing...: Encounters with Remarkable People and Their Most Valuable Advice by Richard Reed
Richard Reed
Used - Very Good
Hardback
Canongate Books Ltd
2016-11-03
368
N/A
Book picture is for illustrative purposes only, actual binding, cover or edition may vary.
This is a used book - there is no escaping the fact it has been read by someone else and it will show signs of wear and previous use. Overall we expect it to be in very good condition, but if you are not entirely satisfied please get in touch with us
Trustpilot