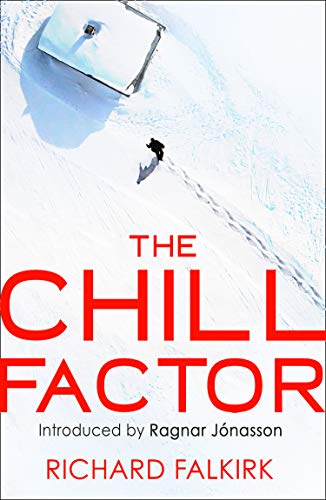 The Chill Factor by Richard Falkirk

Iceland. In the winter it gets light at 10am and dark at 2pm. The daily announcement of the Chill Factor allows you to calculate how quickly you could die from exposure...

The Chill Factor: Suspense and Espionage in Cold War Iceland by Richard Falkirk

Iceland. In the winter it gets light at 10am and dark at 2pm. The daily announcement of the Chill Factor allows you to calculate how quickly you could die from exposure...

Iceland is erupting - and not just its volcano.

It is 1971, the height of the Cold War, and anti-American feeling among Icelanders is running high. When a teenager is found dead after a drunken night out, her clothes torn and face bruised, anger is directed towards the military personnel at the NATO air base at Keflavik who outnumber the local population.

British agent Bill Conran, invited by the Americans to uncover a Russian spy ring, comes to realise that this is no routine assignment. Unsure who can be trusted, and targeted by an unknown assassin, he discovers that Iceland, for all its cold beauty, has never been hotter.

'Pure James Bond ... With dialogue as sharp as the icy wind, Richard Falkirk racks up the tension to a terrific climax.'-Daily Mail

'Like a shot of aquavit ... Iceland has never seemed colder or hotter'-Kirkus

'Recommended for fans of spy thrillers and Icelandic crime fiction'-FictionFanBlog

Richard Falkirk was a pseudonym of Derek Lambert, who was born in 1929. He served in the RAF for two and a half years and then worked as a journalist for local newspapers, becoming a foreign correspondent on the Daily Mirror and then the Daily Express, travelling the world to dangerous locations that later inspired his books. His first novel, Angels in the Snow (1969), was based on first-hand knowledge from a year's assignment to Moscow and entailed him smuggling the manuscript out of the country in a wheelchair. From journeying up the Himalayas in a jeep to being shot at in Israel, his experiences informed his authentic tales of espionage and adventure that helped turn him into a bestselling author of more than 30 novels. Derek's last book, Spanish Lessons, is an affectionate and often hilarious portrait of giving up life as a globe-trotting journalist to settling down to life in rural Spain with his wife Diane.

GOR011095600
9780008433871
0008433879
The Chill Factor: Suspense and Espionage in Cold War Iceland by Richard Falkirk
Richard Falkirk
Used - Very Good
Paperback
HarperCollins Publishers
20210121
240
N/A
Book picture is for illustrative purposes only, actual binding, cover or edition may vary.
This is a used book - there is no escaping the fact it has been read by someone else and it will show signs of wear and previous use. Overall we expect it to be in very good condition, but if you are not entirely satisfied please get in touch with us
Trustpilot