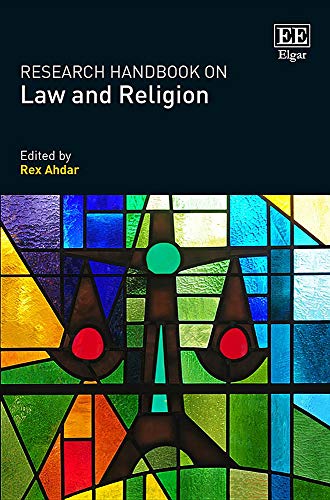 Research Handbook on Law and Religion by Rex Ahdar

Offering an interdisciplinary, international and philosophical perspective, this comprehensive Research Handbook explores both perennial and recent legal issues that concern the modern state and its interaction with religious communities and individuals.

Research Handbook on Law and Religion by Rex Ahdar

Offering an interdisciplinary, international and philosophical perspective, this comprehensive Research Handbook explores both perennial and recent legal issues that concern the modern state and its interaction with religious communities and individuals.

Providing in-depth, original analysis the book includes studies of a wide array of nation states, such as India and Turkey, which each have their own complex issues centred on law, religion and the interactions between the two. Longstanding issues of religious liberty are explored such as the right of conscientious objection, religious confession privilege and the wearing of religious apparel. The contested meanings of the secular state and religious neutrality are revisited from different perspectives and the reality of the international human rights protections for religious freedom are analysed.

Timely and astute, this discerning Research Handbook will be a valuable resource for both academics and researchers interested in the many topics surrounding law and religion. Lawyers and practitioners will also appreciate the clarity with which the rights of religious liberty, and the challenges in making these compatible with state law, are presented.

'Over the course of the last generation, the study of 'law and religion' has exploded in breadth, subtlety and significance. This Research Handbook provides its readers with a rich, varied, and sometimes provocative introduction to the field. Expert chapters not only shed new light on familiar topics, they also identify further avenues for fruitful scholarship. One is left with the sense that the most significant work still lies ahead - and also the intellectual tools to face that challenge.'
--Julian Rivers, University of Bristol Law School, UK

The authors who have contributed so ably to this excellent volume are to be congratulated on scholarship of the highest quality, which treats a wide and rich range of issues at the centre of the field of law and religion today. Their contribution here will be of enormous value to all those who teach, study, and practise in this rapidly developing and important sphere of life.'
--Norman Doe, Cardiff University, UK