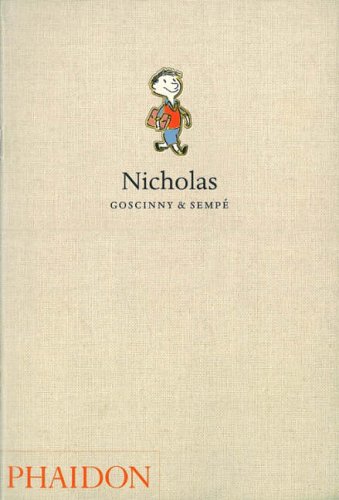 In France and Germany practically every child of seven and upwards knows the adventures of Nicholas. Written by the author of Asterix, Rene Goscinny, and with illustrations by New Yorker illustrator, Jean-Jacques Sempe, the five Nicholas books tell of the endearing exploits of the young French school boy and his chums. Available in twenty six languages and established as a literary cult figure, the sublimely innocent Nicholas has seduced millions of readers all over the world. Considered a classic and regularly used by primary and junior school teachers, these stories have the ability to delight both children and adults. Nicholas is the first of five titles to become available to English speaking children all over the world

In some way similar to the cheekiness of Calvin and Hobbes and the innocence and naivete of characters created by the Italian film maker Roberto Benigni, Goscinny and Sempe have created a world of confusion that makes you chuckle out load. Written between 1959 and 1965 these classic books are continually reprinted around the globe and offer, not only an entertaining read, but a vivid description of French life and culture

'Lovable, naive and very French, Nicholas is timeless.' The Guardian 'illustrated with diabolic humour by Jean Jacques Sempe ... a series of subversive stories about a little French boy which has captivated readers since the Sixties.' Evening Standard 'a chic and sturdily childproof new English edition, translated in ebullient vernacular by Anthea Bell' The Spectator 'hilarious and timeless anecdotes that will have readers giggling.' School Library Journal '...Liberally endowed with Sempe's tiny, comic cartoon figures, these whimsical mini-adventures will captivate readers...' Kirkus Reviews

Rene Goscinny (1926-77), born in Paris, lived most of his early years in Buenos Aires and New York. He returned to France in the 1950s where he met Jean-Jacques Sempe and together they created the character of Nicholas, the famous schoolboy. He later worked with Albert Uderzo on making the adventures of Asterix the Gaul. A prolific and internationally successful children's author, he is also the creator of Lucky Luke and Dingodossiers, among others. He received Cesars repeatedly for his numerous animated cartoons.

Jean-Jacques Sempe (b.1932), expelled from school for bad behaviour, enjoyed a vast range of jobs including winebroker and supervisor at children's holiday camps. His world-renowned illustrations and cartoons are featured on the covers of the New Yorker magazine and amuse the readers of Paris Match and the Figaro Litteraire on a weekly basis.

Anthea Bellwas awarded the Independent Foreign Fiction Prize and the Helen and Kurt Wolff Prize (USA) in 2002 for her translation of W.G. Sebald's Austerlitz. Her many works of translation from French and German (for which she has received several other awards) include the Nicholas books and, with Derek Hockridge, the entire Asterix the Gaul saga by Rene Goscinny and Albert Uderzo.

A Photograph to Treasure *Playing Cowboys *Old Spuds *A Game of Football *The Inspector *Rex *Jochen *A Bunch of Flowers *Our Monthly Reports *Louise *The Minister's Visit *The Cigar *Hop o' my Thumb *The Bike *I'm Ill *Having Fun *Playing with Cuthbert *Mr Bainbridge and the Fine Weather *Running Away from Home
GOR002451110
9780714844824
0714844829
Nicholas by Rene Goscinny
Rene Goscinny
Used - Good
Hardback
Phaidon Press Ltd
2005-05-20
132
N/A
Book picture is for illustrative purposes only, actual binding, cover or edition may vary.
This is a used book - there is no escaping the fact it has been read by someone else and it will show signs of wear and previous use. Overall we expect it to be in good condition, but if you are not entirely satisfied please get in touch with us
Trustpilot