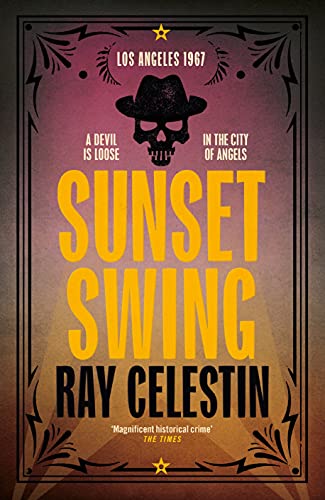 Following The Mobster's Lament, this is the fourth and final book in Ray Celestin's critically acclaimed City Blues quartet.

A young nurse, Kerry Gaudet, travels to the City of Angels desperate to find her missing brother, fearing that something terrible has happened to him: a serial killer is terrorising the city, picking victims at random, and Kerry has precious few leads.

Ida Young, recently retired Private Investigator, is dragged into helping the police when a young woman is discovered murdered in her motel room. Ida has never met the victim but her name has been found at the crime scene and the LAPD wants to know why . . .

Meanwhile mob fixer Dante Sanfelippo has put his life savings into purchasing a winery in Napa Valley but first he must do one final favour for the Mob before leaving town: find a bail jumper before the bond money falls due, and time is fast running out.

Ida's friend, Louis Armstrong, flies into the city just as her investigations uncover mysterious clues to the killer's identity. And Dante must tread a dangerous path to pay his dues, a path which will throw him headlong into a terrifying conspiracy and a secret that the conspirators will do anything to protect . . .

Completing his American crime quartet, Ray Celestin's Sunset Swing is a stunning novel of conspiracy, murder and madness, an unforgettable portrait of a city on the edge.

Celestin's debut The Axeman's Jazz immediately attained cult status, and successive books also impressed. But this is his most dizzying accomplishment, a truly epic crime chronicle. Set in a pulsing 1960s Los Angeles, Celestin creates a joint picture of the histories of organised crime and jazz, full of coruscating detail. -- Barry Forshaw * Financial Times *
Sunset Swing concludes Ray Celestin's outstanding City Blues quartet . . . Celestin's most perfectly wrought portrait, however is of the City of Dreams itself, soaked in corruption and empty of heart. Sunset Swing may be an ode to the classics of hard-boiled noir, but it has more than enough rhythm of its own to take its place beside them * The Times *
Magnificent and moving * Sunday Times Crime Club *
Over four books, beginning with The Axeman's Jazz in 2014, Ray Celestin has constructed a riveting saga of music, the mafia and murder in four American cities from 1919 to the 1960s. Sunset Swing, unfolding in Los Angeles in 1967, brings his City Blues Quartet to a triumphant conclusion . . . Brilliantly combines the page-turning tension of the best crime fiction with a panoramic portrait of a city in the midst of profound social change -- Nick Rennison * Sunday Times *

Here ends one of the finest achievements of recent crime fiction, Ray Celestin's City Blues Quartet . . . Throughout this series, the counterpoint to Celestin's stark portrayal of a fundamentally corrupt and gangster-ridden America has been his rare ability to capture in prose something of the glory of the music made by Armstrong and his fellow jazz-men. Here he rises to the final challenge of Armstrong's last comeback . . . Few artists have combined greatness and lovability to the extent Armstrong did, and these outstanding hard-boiled thrillers double as a worthy tribute to him

Sunset Swing brings Ray Celestin's brilliant City Blues Quartet to an end in quite some style. This outstanding series has tracked its characters across four major American cities and over half a century . . . Each of the four books is an epic in its own right, but here, as winter wildfires rage at the end of the continent, the feel is almost apocalyptic . . .

The section . . . where Amstrong is first confounded by, then finds a new way to understand and interpret, Bob Thiele's lyrics for 'What A Wonderful World', is as fine and nuanced a piece of writing about music as you'll find anywhere. It's one of several superb and moving moments in the best book in a quite remarkable series. Start here if you want, but to get the full effect, put The Axeman's Jazz, Dead Man's Blues, and The Mobster's Lament on your Christmas list as well. It would almost be a crime not to.

* The Quietus *
The series is a delight * The Times *
This lively, jazz-based series can only be cause for celebration * Sunday Times *
Not only a satisfying and multi-layered mystery, but also a well researched and dynamic portrait of a teeming city, rife with corruption * Guardian *
A vividly written crime thriller which is a contender for book of the year -- Daily Mirror on The Mobster's Lament
One of the most ambitious and riveting works of crime fiction in years . . . -- Sunday Express on The Mobster's Lament
Captivating -- Spectator on Dead Man's Blues
An absolute must for true crime fanatics * Refinery 29 *
Outstanding -- Daily Telegraph on The Axeman's Jazz
Ray Celestin is a novelist and screenwriter based in London. His debut novel, The Axeman's Jazz, won the CWA New Blood Dagger for best debut crime novel of the year, and was featured on numerous 'Books of the Year' lists. His follow-up, Dead Man's Blues, won the Historia Historical Thriller of the Year Award, and was shortlisted for a number of other awards, including the CWA Gold Dagger for best crime novel of the year. The novels are part of his City Blues series, which charts the twin histories of jazz and the Mob through the middle fifty years of the twentieth century. Sunset Swing is the fourth instalment in this series.
GOR011761747
9781509838974
150983897X
Sunset Swing by Ray Celestin
Ray Celestin
City Blues Quartet
Used - Very Good
Hardback
Pan Macmillan
20211125
560
N/A
Book picture is for illustrative purposes only, actual binding, cover or edition may vary.
This is a used book - there is no escaping the fact it has been read by someone else and it will show signs of wear and previous use. Overall we expect it to be in very good condition, but if you are not entirely satisfied please get in touch with us
Trustpilot