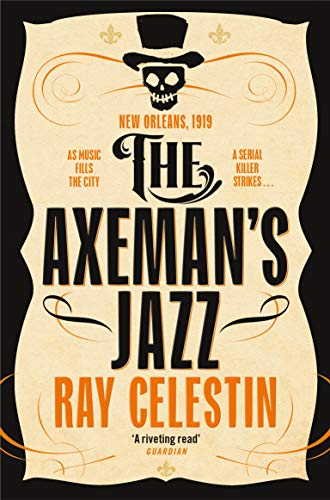 The Axeman's Jazz by Ray Celestin

The Axeman's Jazz by Ray Celestin

Inspired by a true story, set against the heady backdrop of jazz-filled, mob-ruled New Orleans, The Axeman's Jazz by Ray Celestin is a gripping thriller announcing a major talent in historical crime fiction.

New Orleans, 1919. As a dark serial killer - the Axeman - stalks the city, three individuals set out to unmask him:

Detective Lieutenant Michael Talbot - heading up the official investigation, but struggling to find leads, and harbouring a grave secret of his own.

Former detective Luca d'Andrea - now working for the mafia; his need to solve the mystery of the Axeman is every bit as urgent as that of the authorities.

And Ida - a secretary at the Pinkerton Detective Agency. Obsessed with Sherlock Holmes and dreaming of a better life, she stumbles across a clue which lures her and her musician friend, Louis Armstrong, to the case - and into terrible danger . . .

As Michael, Luca and Ida each draw closer to discovering the killer's identity, the Axeman himself will issue a challenge to the people of New Orleans: play jazz or risk becoming the next victim.

The Axeman's Jazz is the first book in Ray Celestin's prize-winning City Blues quartet. It is followed by the second installment, Dead Man's Blues.

The evocative prose brings the jazz-filled, mob-ruled 'Big Easy' of pre-prohibition America to life in glorious effect with a story full of suspense and intrigue. Stunning * Sunday Express *
A rewarding crime novel, swinging its way to a terrifying denouement with all the panache of a New Orleans marching band . . . An excellent debut * The Times *
A fascinating portrait of a vibrant and volatile city and a riveting read * Guardian *
Gripping . . . Celestin smartly evokes the atmosphere of 1919 New Orleans, and a city dominated by music and the mob * Sunday Times *
Based on a true story . . . this thriller blends voodoo, gangsters and jazz into an intoxicating mix * Sunday Mirror *
Outstanding * Daily Telegraph *
A clever and utterly believable procedural with a suitably grisly killer, set in a brilliant and vibrant historical background * Crime Review *
The best debut I've read this year * Scotsman, Crime Books of the Year *
Superb * Guardian Crime Books of the Year *
Celestin has skilfully woven around the facts a clever story of three detectives who, in different ways and for different motives, set out to find the murderer. He brilliantly portrays the mood of a city under a siege of fear. Fictional musicians mix with the real jazz artists of the period, not least Louis Armstrong. * The Times, Crime Books of the Year *
With such unlikely figures as Oscar Wilde being dragooned as sleuths in crime fiction, perhaps jazz trumpeter Louis Armstrong is not such a stretch - Ray Celestin's debut novel places him as one of a group on the trail of a serial axe murderer in early 20th century New Orleans. The Axeman's Jazz quickly gleaned awards, sporting an acute sense of period shored up by an evocation of the sound of early jazz - no easy thing on the printed page. There's a challenge for this writer: how does he follow this up? * Independent Crime Books of the Year *

An absolute must for true crime fanatics

* Refinery29 *
Ray Celestin is a novelist and screenwriter based in London. His debut novel, The Axeman's Jazz, won the CWA New Blood Dagger for best debut crime novel of the year, and was featured on numerous 'Books of the Year' lists. His follow-up, Dead Man's Blues, won the Historia Historical Thriller of the Year Award, and was shortlisted for a number of other awards, including the CWA Gold Dagger for best crime novel of the year. The novels are part of his City Blues series, which charts the twin histories of jazz and the Mob through the middle fifty years of the twentieth century.
GOR011924555
9781529065633
1529065631
The Axeman's Jazz by Ray Celestin
Ray Celestin
City Blues Quartet
Used - Very Good
Paperback
Pan Macmillan
20210805
464
Winner of CWA John Creasey New Blood Dagger 2014 (UK)
Book picture is for illustrative purposes only, actual binding, cover or edition may vary.
This is a used book - there is no escaping the fact it has been read by someone else and it will show signs of wear and previous use. Overall we expect it to be in very good condition, but if you are not entirely satisfied please get in touch with us
Trustpilot