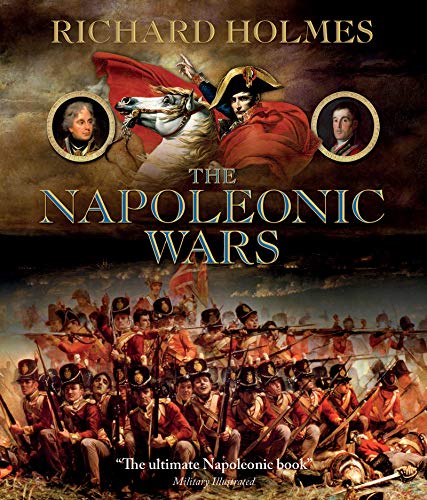 Holmes relives Napoleon's life and times in this extraordinary period by examining letters, military maps, reports, proclamations, ship's logs and coded messages, which were previously filed away or exhibited in archives in Europe.

Published to mark the 250th anniversary of Napoleon's birth.

Holmes relives Napoleon's life and times in this extraordinary period by examining letters, military maps, reports, proclamations, ship's logs and coded messages, which were previously filed away or exhibited in archives in Europe.

Napoleon was a charismatic and astute military leader who built an empire in a series of astounding campaigns from 1796 to 1812, in which he won many of the most famous battles of all time - the Pyramids, Marengo, Austerlitz, Jena, Wagram and Borodino. At the height of his powers he had transformed France's administrative, educational and legal systems, and most of the continent of Europe was under his control, from Portugal to Moscow. He was eventually brought down by the combined forces of many nations, but his influence on the times was so great that he has come to define a period in history.

'The ultimate Napoleonic book' * Military Illustrated. *
Professor Richard Holmes is author of a string of bestsellers, most recently Tommy: The British Soldier on the Western Front. He is author of the international bestseller The D-Day Experience (over 200,000 copies sold) and wrote the top 10 bestsellers Wellington: The Iron Duke and Red Coat. Holmes was General Editor of the Oxford Companion to Military History and has presented seven documentary series for the BBC, beginning with 'War Walks' and including the recent 'In the Footsteps of Churchill'.

Introduction: The Age of Napoleon * The Revolutionary Background * The Making of a Reputation * Artillery * The Italian Campaign * Infantry * Egypt and Syria * Brumaire and Marengo * Ruler and Lawgiver * Ulm and Austerlitz * War at Sea * Napoleon's Art of War * The Jena Campaign * Grande Armee * Berlin to Tilsit * Cavalry * Napoleon in Spain * Napoleon's Family * The Wagram Campaign * The Spanish * Ulcer 1809-11 * The Imperial Court * The War of 1812 * Russia: The Niemen to Moscow * Russia: Fire and Snow * Military Medicine * The Spanish Ulcer 1812-14 * The Home Front: Napoleonic France * The Battle of the Nations * Napoleon's Greatest Adversaries * The Champagne Campaign * The Congress of Vienna * The Hundred Days: Return and Attack * The Imperial Guard * The Hundred Days: Waterloo * Imperial Twilight: St Helena * Napoleon's Legacy.

NGR9780233005898
9780233005898
0233005897
The Napoleonic Wars by Prof Richard Holmes
Prof Richard Holmes
New
Hardback
Welbeck Publishing Group
2019-07-11
160
N/A
Book picture is for illustrative purposes only, actual binding, cover or edition may vary.
This is a new book - be the first to read this copy. With untouched pages and a perfect binding, your brand new copy is ready to be opened for the first time
Trustpilot