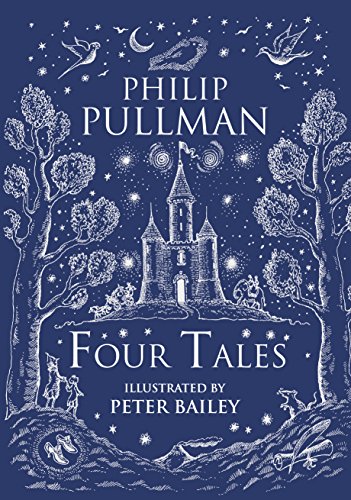 Brings together four of Philip Pullman's classic fairy tales for younger readers: The Firework-Maker's Daughter, I Was a Rat!, The Scarecrow and his Servant, and Clockwork. Along with illustrations, this gift edition contains a prologue and epilogue from the author.

Four Tales brings together four of Philip Pullman's classic fairy tales for younger readers: The Firework-Maker's Daughter, I Was a Rat!, The Scarecrow and his Servant and Clockwork. This beautiful gift edition contains a prologue and epilogue from the author, as well as stunning illustrations from Peter Bailey.

The Firework-Maker's Daughter: Lila is determined to become a firework maker like her father. But can she convince Razvani, the Fire Fiend who lurks in Mount Merapi, that girls have what it takes, too?

I Was a Rat!: When a small boy turns up on the doorstep of old Bob the cobbler and Joan the washerwoman, all he can tell them is 'I was a rat!'. But who is he really, and where has he come from? A wonderful, surprising and sharply-observed re-telling of Cinderella.

The Scarecrow and his Servant: After a bolt of lightning hits him, a scarecrow is brought magically to life... but without many brains. Young Jack becomes his faithful ally, and an exciting and adventure-packed journey begins.

Clockwork: A tormented apprentice, a deadly mechanical knight, a girl with a perhaps too-tender heart, and an inventor who some say is the devil... all wrapped up in a Gothic story-within-a-story, as elegantly crafted as the most intricate clockwork.

From the master storyteller comes this beautiful special edition that showcases four classic Philip Pullman yarns aimed at young children. But its just as likely to delight the adults lucky enough to read them at bed time -- Iwan Davies * South Wales Argus *
Philip Pullman is one of the most highly respected children's authors writing today. Winner of many prestigious awards, including the Carnegie of Carnegies and the Whitbread Award, Pullman's epic fantasy trilogy His Dark Materials has been acclaimed as a modern classic. It has sold 17.5 million copies worldwide and been translated into 40 languages. In 2005 he was awarded the Astrid Lindgren Memorial Award. He lives in Oxford.
GOR002603440
9780385619196
0385619197
Four Tales by Philip Pullman
Philip Pullman
Used - Very Good
Hardback
Penguin Random House Children's UK
2010-10-28
640
N/A
Book picture is for illustrative purposes only, actual binding, cover or edition may vary.
This is a used book - there is no escaping the fact it has been read by someone else and it will show signs of wear and previous use. Overall we expect it to be in very good condition, but if you are not entirely satisfied please get in touch with us
Trustpilot