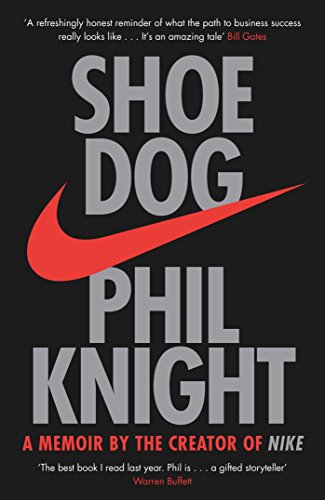 The first-ever memoir of the legendary co-founder of Nike Inc, Phil Knight

Shoe Dog: A Memoir by the Creator of NIKE by Phil Knight

'A refreshingly honest reminder of what the path to business success really looks like ... It's an amazing tale' Bill Gates

'The best book I read last year was Shoe Dog, by Nike's Phil Knight. Phil is a very wise, intelligent and competitive fellow who is also a gifted storyteller' Warren Buffett

In 1962, fresh out of business school, Phil Knight borrowed $50 from his father and created a company with a simple mission: import high-quality, low-cost athletic shoes from Japan. Selling the shoes from the boot of his Plymouth, Knight grossed $8000 in his first year. Today, Nike's annual sales top $30 billion. In an age of start-ups, Nike is the ne plus ultra of all start-ups, and the swoosh has become a revolutionary, globe-spanning icon, one of the most ubiquitous and recognisable symbols in the world today.

But Knight, the man behind the swoosh, has always remained a mystery. Now, for the first time, he tells his story. Candid, humble, wry and gutsy, he begins with his crossroads moment when at 24 he decided to start his own business. He details the many risks and daunting setbacks that stood between him and his dream - along with his early triumphs. Above all, he recalls how his first band of partners and employees soon became a tight-knit band of brothers. Together, harnessing the transcendent power of a shared mission, and a deep belief in the spirit of sport, they built a brand that changed everything.

A memoir rich with insight, humour and hard-won wisdom, this book is also studded with lessons - about building something from scratch, overcoming adversity, and ultimately leaving your mark on the world.
'A refreshingly honest reminder of what the path to business success really looks like. It's a messy, perilous, and chaotic journey riddled with mistakes, endless struggles, and sacrifice... In the pages of Shoe Dog, however, Knight opens up in a way few CEOs are willing to do. He's incredibly tough on himself and his failings... Knight is amazingly honest about the accidental nature of his company's success... It's an amazing tale. It's real.' -- Bill Gates
'I've known Phil Knight since I was a kid, but I didn't really know him until I opened this beautiful, startling, intimate book. And the same goes for Nike. I've worn the gear, with pride, but I didn't realize the remarkable saga of innovation and survival and triumph that stood behind every swoosh. Candid, funny, suspenseful, literary this is a memoir for people who love sport, but above all it's a memoir for people who love memoirs.' -- Andre Agassi
'A touching, highly entertaining adventure odyssey, with much to teach about innovation and creativity. Phil Knight takes us back to the Big Bang of the swoosh, recalls how he first begged and borrowed from reluctant banks, how he assembled a crew of eccentric but brilliant misfits, how they all worked together to build something unique and paradigm-changing. An inspiration for everyone with an unconventional dream.' -- Michael Spence, Nobel Prize-winning economist
'Shoe Dog is a great American story about luck, grit, know-how and the magic alchemy of a handful of eccentric characters who came together to build Nike. That it happened at all is a miracle, because as I learned from this book, though we are a nation that extols free enterprise, we also excel at thwarting it. This is Phil Knight, one on one, no holds barred. The lessons he imparts about entrepreneurship and the obstacles one faces in trying to create something, are priceless. The pages I folded down are too many to mention.' -- Abraham Verghese, author of 'Cutting for Stone'
'The best book I read last year was Shoe Dog, by Nike's Phil Knight. Phil is a very wise, intelligent and competitive fellow who is also a gifted storyteller' -- Warren Buffett
'Nike founder Phil Knight's book, Shoe Dog, is the ultimate story of entrepreneurship - and the grit, passion and perseverance required to succeed.' -- Ivanka Trump
'This memoir by the founder of Nike is a must-read for everyone on your list. Knight shares the inside story of the company's early days as a start-up and how it evolved into one of the world's most iconic brands.' * Sports Illustrated *
One of the world's most influential business executives, Phil Knight is the founder of Nike, Inc. He served as CEO of the company from 1964 to 2004, as board chairman through 2016, and he is currently Chairman Emeritus. He lives in Oregon with his wife, Penny.
GOR007811880
9781471146701
1471146707
Shoe Dog: A Memoir by the Creator of NIKE by Phil Knight
Phil Knight
Used - Like New
Hardback
Simon & Schuster Ltd
20160426
400
N/A
Book picture is for illustrative purposes only, actual binding, cover or edition may vary.
The book has been read, but looks new. The book cover has no visible wear, and the dust jacket is included if applicable. No missing or damaged pages, no tears, possible very minimal creasing, no underlining or highlighting of text, and no writing in the margins
Trustpilot