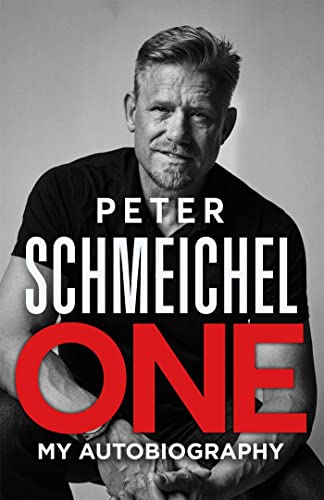 One: My Autobiography by Peter Schmeichel

The autobiography of one of the greatest goalkeepers of all time.

One: My Autobiography by Peter Schmeichel

'Why me? How could a boy from a Copenhagen tower block say I want to be a champion with Manchester United and Denmark and make it happen?'

Peter Schmeichel is a giant of football, who won more Premier League titles (five) than any player in his position and captained Manchester United in the incomparable, last-gasp Treble-clinching win over Bayern Munich in the 1999 Champions League final. 'I don't believe a better goalkeeper played the game,' Sir Alex Ferguson said. One: My Autobiography is Schmeichel's story.

In it, he takes us inside the remarkable, winning environment of a club that transformed football during the 1990s, and on to the pitch on that crazy, breathless night in Barcelona in 1999. From Ferguson's unique gifts to Eric Cantona's unique personality, he delivers a close-up and insightful portrait of United's golden era.

However, One: My Autobiography goes way beyond the pitch.

Schmeichel has an incredible family story to tell, starting with his father, Antoni, a brilliant Polish jazz musician who battled demons and for years kept a momentous secret from those around him. And he explores what he has been able to pass on to his own son, Kasper - himself a Premier League-winning goalkeeper and number one in the Danish national side.

Peter's life after football, seldom straightforward, is described with astonishing candour. One: My Autobiography is about football, origins, journeys and legacy.

Peter Schmeichel won ten league titles, three FA Cups and nine other major trophies in a club career spanning 19 years, 748 games and - because he was no ordinary goalkeeper - ten goals. Its crowning moment came in 1999 when he captained Manchester United to victory in an unforgettable Champions League final. He was a key figure in United's successes during the 1990s, starting with their first domestic league title in more than a quarter of a century. Sir Alex Ferguson, having paid just 505,000 to sign him in 1991, hailed him as 'the bargain of the century'. On the international stage, he was voted both world and European goalkeeper of the year while helping Denmark to a miraculous triumph at Euro 92 and won a record 129 caps for his country. Named by Pele, on behalf of FIFA, as one of the 100 greatest living footballers and by Match of the Day as the Premier League's best ever No 1, perhaps only Gordon Banks and Lev Yashin are his rivals to the status of greatest goalkeeper of all time. Jonathan Northcroft, who collaborated with Peter Schmeichel on the writing of One: My Autobiography, is Football Correspondent of the Sunday Times and author of three books, including Fearless: The Amazing Underdog Story of Leicester City, which was shortlisted at the Cross Sports Book Awards in 2017. A regular guest on Sky Sports and Premier League Productions television programmes, and on The Game and BT Sport Football Writers podcasts, he won the inaugural Jim Rodger Memorial Award for young sports writers in Scotland and has been shortlisted for Football Writer of the Year and Feature Writer of the Year at the Sports Journalists' Association awards.
NPB9781529354096
9781529354096
1529354099
One: My Autobiography by Peter Schmeichel
Peter Schmeichel
New
Hardback
Hodder & Stoughton
20210930
416
N/A
Book picture is for illustrative purposes only, actual binding, cover or edition may vary.
This is a new book - be the first to read this copy. With untouched pages and a perfect binding, your brand new copy is ready to be opened for the first time
Trustpilot